The Scariest Scenes From Disney Movies That Traumatized Your Childhood

Greg Smith
The Scariest Scenes From Disney Movies That Traumatized Your Childhood July 16, 2019Leave a comment 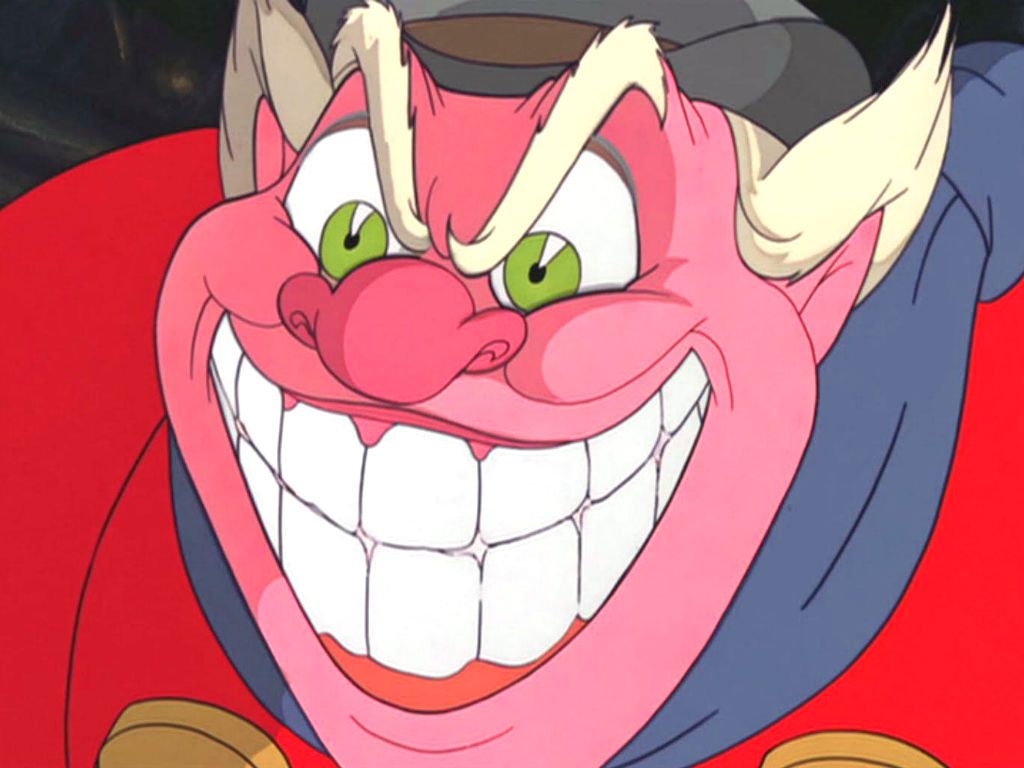 Behold, the scariest Disney movie moments that pop out of your favorite, friendly childhood movies to scare the Mickey Mouse stuffing out of you. Some spoilers ahead, so tread this small world lightly.

It's not like Cruella de Vil was a sterling figure of niceness in the previous moments of "101 Dalmatians." But near the end, when she gets behind the wheel, LOOK OUT. Her eyes turn red and spiral with pure psychedelic terror, causing a generation of viewers to become subconsciously afraid of their driver's ed instructors.

What happens when a figure of pure evil acquires pure power? They turn into a giant friggin' genie, of course. In contrast to Robin Williams' fun-loving blue genie, "Aladdin" climaxes with villain Jafar transforming into a frighteningly red monster, all fangs and electricity. And, frankly, muscles. Yeah, we're calling the evil genie jacked. You gonna disagree?

"Bambi" opens with two bangs. The first, a gunshot from a viciously rendered hunter that strikes through Bambi's mother's body. The second, everyone viewer's sense of innocence and comfort instantaneously exploding. With this formative scare, Walt Disney was basically telling all children: Nothing is safe.

'Beauty and the Beast' - The West Wing

Should Belle and The Beast really wind up together? Isn't the central romance of "Beauty and the Beast" predicated on a particularly unhealthy, interspecies case of Stockholm syndrome? That issue is complicated. What's simple is how badly the Beast scared Belle (and all of us) when he roared at her to get out of the West Wing. Yikes!

'The Black Cauldron' - The Horned King

Made during Disney's atypically dark creative period in the 1980s, "The Black Cauldron" has aged into an underseen cult curio. But those who dared watch the PG-rated fantasy were treated to all kinds of upsetting imagery, especially the frighteningly villainous Horned King. He's kind of like if Skeletor got into metal -- but scarier than that sounds.

Sorry, Tim Burton. No live-action remake trickery can live up to the surreal horrors of the "Pink Elephants on Parade" sequence in the original 1941 animated "Dumbo." In the scene, Dumbo and Timothy, his mouse friend, get drunk and hallucinate some downright terrifying pink elephants. It is, without exaggeration, the scariest drug trip depicted on screen to date.

An educational, entertaining, family-friendly trip through history's most iconic classical music pieces! Yes, "Fantasia" checks these boxes, but it also manages to crescendo to a fevered pitch of gothic hysteria in its "Night on Bald Mountain" segment. The animators faithfully render nightmarish demons in perfect sync with Modest Mussorgsky's spooky song.

'The Fox and the Hound' - Bear Necessities

"The Fox and the Hound" are both cute, which is nice. But because we apparently cannot have nice things, they are offset by the presence of a ravenous bear, who literally salivates with desire to eat our cute heroes. A rule of thumb for dealing with Disney characters: Don't trust red eyes.

'The Adventures of Ichabod and Mr. Toad' - The Headless Horseman

In Disney's double feature "The Adventures of Ichabod and Mr. Toad," one story is about a series of quiet animals who live in a quiet village. The other story is about a vicious serial killer who doesn't have a head but enjoys beheading other people. Wanna guess which one is the scary one?

To save Megara, his love, Hercules makes a literal deal with the devil: Jump into the river of souls without succumbing, and you can get her back. The nitty-gritty details of this action are instantly traumatizing, as we watch our eternally youthful demigod suddenly decay and decompose before our eyes. It's a vile bit of body horror from the mouse house, and it is messed up.

'The Hunchback of Notre Dame' - Hellfire

In a film full of surprisingly adult and dark material, "The Hunchback of Notre Dame" surprises even its most jaded of viewers with Frollo's villain song, "Hellfire." Beyond regularly using a word forbidden from most kids' lips, "Hellfire" depicts, with startling clarity, the depths of a human's capacity for repression, religious persecution, and overall monstrosity.

'Inside Out' - Personality Islands Crumble

Pixar's "Inside Out" is anchored by the literal personification of Joy. But when Joy's mission to save her human, Riley, hits a roadblock, we watch the personification of clinical depression take brutal, visceral effect. Her "personality islands," which we've grown to recognize and love, crumble into dust. It's equal parts harrowing and heartbreaking.

Roald Dahl ain't exactly known for holding his young audience's hand. And when the stop-motion adaptation of "James and the Giant Peach" hit the screen, it rendered a series of undead, skeletal pirates with no mercy. Forget Jack Sparrow -- these Disney pirates will have you shivering your timbers, pronto.

Ursula is the camp hero we need. And she does not deserve the fate befallen to her at the climax of "The Little Mermaid." Sure, she transforms into a giant, flummoxing, frightening giant using a magic trident. But did Prince Eric really need to impale her with his boat? And did we need to see it in full detail? We are all "Poor Unfortunate Souls."

How can a film with actual monsters as its main characters scare you? By putting said monsters into a scary, foreign world. Sully and Mike, our corporate heroes in the world of "Monsters, Inc.," are thrown into the Himalayan wilderness by scheming rival Randall. After getting used to a world of colorful busyness, the monochromatic stillness of the snow shocks.

'The Nightmare Before Christmas' - Kidnap the Sandy Claws

"The Nightmare Before Christmas," by design, is meant to scare and provoke those brave kiddies who want a spooky stuffer in their stocking. But among its aesthetic grotesqueries lies "Kidnap the Sandy Claws," a downright vicious song from venomous children Lock, Shock, and Barrel about the horrible things they wish to do to Santa. It's, frankly, a lot!

Here's a take: Disney invented irony. How else do you explain "Pleasure Island," the name of the anything-but-pleasurable place that turns Pinocchio and his newfound friends into donkeys? The transformation sequences are physically horrific. The fate that befalls them after -- y'know, being sold into slave labor -- is psychologically grim. A double whammy.

'Snow White and the Seven Dwarfs' - The Haunted Forest

There's Grumpy, Happy, Sleepy, Bashful, Sneezy, Dopey, and Doc. But did you know there's an eighth dwarf? It's "Traumatizey." As in, "I just watched the 'Haunted Forest' sequence from 'Snow White and the Seven Dwarfs,' and now I'm all Traumatizey." We'd take a poison apple over this tree-filled horror show any day.

In "Toy Story," Andy's room is a place of joyful play. Of bright, blue skies and fluffy clouds. Conversely, Sid's room, located within the home next door to Andy, is a place of dark, Dr. Moreau-ian abominations and unchecked white suburban male id. And when Woody and Buzz find themselves in Sid's evil workshop, the resulting sequence is something straight out of a horror flick.

The "Toy Story" franchise is marked by narrow escapes. We watch our favorite toys get into an impossible jam, and enjoy as they get themselves out. But in the third installment, there doesn't seem to be a way out of the trash pile heading toward the hellscape of the incinerator. So what do the toys do? Hold hands. Gird their constitutions. And accept death. Enjoy, kids!

In a movie full of mysteries, one rings loudest with emotional importance. And no, it's not "Who Framed Roger Rabbit." It's "Who killed Eddie Valiant's Brother?" While it's not unsurprising that a character called Judge Doom is up to no good, it is surprising (and horrifying) when he reveals himself to be both the killer of Valiant's brother and a demonic-voiced, red-eyed Toon.

Scar, the villain of "The Lion King," deserves some kind of punishment. Of this, we're sure you agree. But did he really deserve to be eaten alive by his hyena cronies? And did Simba really need to ruthlessly allow it to happen? And did we, as children, need to witness this brutal act of carnage? Of this, we're not sure how anyone feels, because we're too messed up by the scene.

Does Wreck-It Ralph's catchphrase, "I'm gonna wreck it," refer to our psychological stability? Or, as "Ralph Breaks the Internet" asserts, does it refer to his own? In the culmination of Ralph's bid to possess his newfound friend Vanellope, a virus causes thousands of ultra-jealous Ralph clones to become a giant Ralph monster bound to mess up kids worldwide.

Do children need to see the graphic silhouette of a man hanging to death? Unlikely. But that's what the filmmakers of "Tarzan" decided to give us in their depiction of Clayton's fate. Then again, Clayton was an imperialist, sexist, poaching jerko. So maybe Disney is trying to condition us to be better people by any means necessary.

For much of "Zootopia"'s running time, Assistant Mayor Bellwether is a somewhat nerdy sheep voiced with endearing silliness by Jenny Slate. Then, it's hard revealed that she was the conniving, evil, vicious mastermind behind the whole plot. And any kid watching will now be looking over their shoulder, questioning everyone, scared of all they love. Thanks, Disney!