Why Did A Stray Dog Join This Priest On the Altar During Mass?

Matthew Loffhagen
Why Did A Stray Dog Join This Priest On the Altar During Mass? November 6, 2019Leave a comment 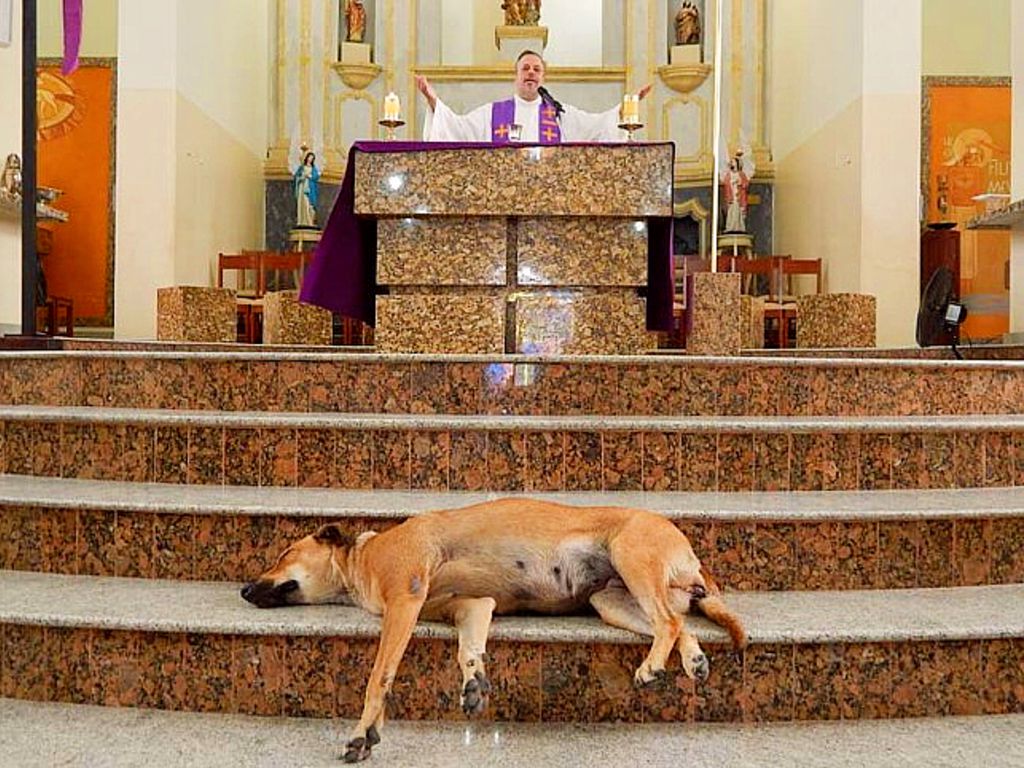 All dogs go to heaven, and as such, they shouldn't have to go to church. But after mounting homelessness arose in this Brazilian city, one man stepped up to make sure that even the stray dogs around him had food and shelter. This pastor has made sure that his canine friends are never excluded, even from Sunday mass. As Edie Brickell said, "Religion is the smile on a dog."

Sadly, this dog is one of many who can be found along the streets of this Brazilian city, without a home or food. Because of the mounting problems of homelessness in the city, the dogs are sadly not the first priority for citizens. But that doesn't mean that some people living in the city don't have hearts of gold, as you'll read about below...

Gravatá has a real problem with stray dogs. Many are left malnourished and without proper shelter, suffering because they're not receiving the care they deserve. But this city is also home to some of the kindest and best intentioned people who have devoted their lives to giving care to every creature.

No Where To Turn For Safety

Obviously malnourished, this dog relies on the kindness of passersby and strangers who occasionally treat him to a meal or a few extra bites of food. But, for this dog's life, he had not had an owner who he could rely on to take care of him. That is, until one kind man stepped in and changed this dog's life forever...

Gravatá Has a Homeless Problem, Too

It's easy to turn a blind eye to the stray dogs in your town when there are also homeless people on the streets. Sadly, not just kindness can bring an end to the poverty in this city, but one man proved that you can make a difference with small, kind actions.

These Men Set Out to Help

Sometimes all it takes to make a difference in a creature's life is to give a little attention and care to them instead of overlooking them. Among this group of men is Paulo Gomes, who will prove below to be a saint among men.

The Care These Dogs Deserve

Paulo Gomes, pictured above, devoted his spare time to taking care of the stray dogs he met on the streets of Brazil. This dog particularly caught his heart and repaid all of the love that was shown to him tenfold. And that would prove to be in both of their favors...

His First Wash In Ages

This pup had never had a forever home, let alone a bath! Thankfully, Gomes and his friends took the time out of their day to make sure this dog was well taken care of and didn't have any lasting injuries or illnesses from his time on the streets. What happens next will really warm your heart.

A Trip to The Vet

Gomes also treated this pup to his first ever trip to a veterinarian. They found that the dog was perfectly healthy, but had a bit of wear and tear from his rough past. But, it was nothing that time, food and shelter couldn't fix. Thankfully, this dog would never have to return to the streets because his new home would be better than he could imagine...

A New Home With A Kind Owner

Gomes has taken in several stray dogs and given them the care they need, which includes trips to the vets for all. But how can he afford to care for so many animals? With his devoted friends alongside him and the support of his church, this Brazilian priest has proven that anything is possible.

Food And Shelter, At Last

In an effort to address this injustice, Father Gomes has made it his mission to care for and foster as many stray dogs as he can. This even means bringing them inside his home, even when it doesn't seem like there is enough room for everyone.

Their Owner Devoted His Life to The Service of Others

When necessary, Gomes pays for the dogs he rescues to receive medical treatment. A lot of them suffer from some very serious conditions, so keeping strays healthy is no small task for the earnest man of God. So, who looks after the more sickly animals?

Helping Those in Need

Father Gomes' efforts have already made a significant difference. Many stray dogs in Gravatá have been successfully rehoused, and many others have been healed of significant injuries and illnesses. Some of the stray dogs have even found homes with other members of the church!

Father Gomes knows he can't care for all of Gravatá's stray dogs alone, so he's come up with a smart way to get his congregation to help out: he has incorporated willing dogs into his Sunday worship.

Every Sunday, the local church, Paróquia de Sant’Ana Gravatá, plays host to any number of strays. In addition to lounging around within the chapel, they even take part in sermons and ceremonies as part of Father Gomes' master plan.

Father João Paulo Araujo Gomes serves the parish of Santana in Gravatá, Brazil. His ministry is different to most holy men, because he's made it his mission not just to help wayward humans, but also, wayward dogs.

In an effort to help serve stray dogs within his community, Father Gomes invites them into his chapel whenever possible, including giving them place of pride in his regular Sabbath services.

Getting Closer to Dog

The dogs aren't just in the services for show. Father Gomes hopes that his congregation will be moved by their plight, and will offer to adopt them, giving them the forever homes they deserve.

It's for this reason that Gomes insists that the dogs be given a place of prominence within his services, so that people will feel inspired to do something kindhearted as a result of their Sabbath worship.

The rest of the week, the chapel is still an open and inviting home to any stray that might wander in. Father Gomes wants every dog to have a place to find shelter and nourishment.

According to Gomes, "They will always be able to enter, sleep, eat, drink their water and find shelter and protection, for this house is of God and they are of God."

Father Gomes also practices what he preaches. He's adopted several of the more severely sick dogs himself, and has helped nurse them back to health. Now, they live with him in his home and sleep in his bed at night.

Father Gomes considers his ministry to Gravatá's dog population to be an extension of his ministry to humans under his care. After all, he argues, we are all God's creatures..

On Saints and Sinners

Says Gomes, "If I’m the greatest sinner I can enter— imagine these four-legged angels. Nobody touches my protected." And who can argue with that?

It's hard to argue with this line of thought, and Gomes certainly has won his fair share of admirers for his efforts, both within his local congregation, and further afield.

After a post on social media about Gomes' efforts went viral, the Father was inundated with messages of love and appreciation. Many called him a "true hero" for his efforts to help those who were otherwise overlooked.

Never Too Busy To Pet

Of course, the dogs who attend Father Gomes' sermons are always eager to share their love with others. It's not uncommon for dogs to sit happily with various families in the congregation during a service, receiving affection and bellyrubs.

It's clear that Father Gomes is a real animal lover, having successfully helped so many pets in need, and even invited a few into his home permanently. This example of love and charity is worth a thousand sermons.

Father Gomes isn't even the only religious leader to form a connection with animals as a result of his work. Everyone in his parish, and even further afield, needs to be prepared to help out a four-footed friend in need.

Father Gomes' work with his canine followers makes him a modern-day Francis of Assisi in the eyes of his supporters. He's certainly following the spirit of Christian teaching, reaching out to the poor and needy.

Perhaps not everyone is quite as big a fan of stray dogs as Father Gomes. This if anything simply proves that nobody, no matter how worn down or desperate, is beyond being rescued.

Plus, what better use for a large chapel when it's not filled with people? With worship services only taking place one day a week, it makes sense to open up the building to those in need.

Of course, the dogs don't need much to he happy. It's enough to simply have a little shelter, and some food and water. Plus the occasional scratch behind the ear.

All Dogs Go to Heaven

Father Gomes' example shows us all that the world can be a kinder place, if only we're willing to try our best to spot the overlooked and downtrodden among our society that really need a bit more love.