Matthew Loffhagen
Fishermen Think They Found a Seal on a Floating Iceberg Until They Get Closer and Realize They are in Danger May 6, 2019Leave a comment 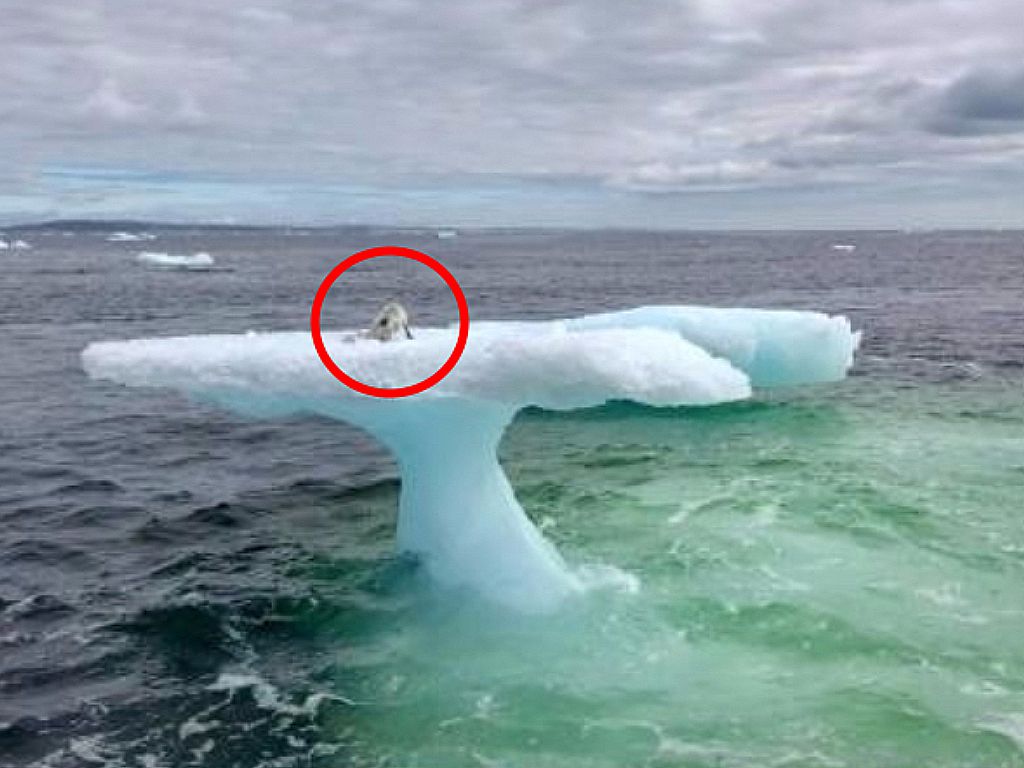 When a trio of fishermen heads out looking for crabs, they see something surprising: a creature trapped on ice, floating out in the sea all by itself, in serious need of rescue. They believe this to be one of the usual sea animals they typically see, like a seal, but what it actually is changed the course of their trip and their lives forever...

Thanks for All the Fish

Mallory Harrigan, Allan Russell and Cliff Russell own a small fishing boat together. They trawl off the coast of Labrador, looking for cool stuff. And they recently found something to fit that description...

The trio, who come from a small fishing village, had only been boating enthusiasts. Eventually, though, they took the plunge and started their own fishing business to turn their hobby into a profession.

Mallory and her crew set out that day as they always did: chipper due to excitement and the chilly weather of Newfoundland. Their excitement keeps them alert and aware of their surroundings, which is needed because there are many dangers to stay aware of when you're at sea, including weather patterns and wildlife.

A Fishy for the Dishy

With their fishing boat, the trio are able to haul in all kinds of marine animals. But fish and crabs aren't the only things they get to see while trawling the cold northern waters...

Just Another Day at Sea

The crew catch dozens of pounds of fish a day, so it isn't odd that one of them will prepare food from their daily catch while the others do their duties on the ship. That day, Mallory was on lookout while one of her shipmates readied the fish for shipping and eating.

Something on the Coast

Mallory had been working on the sea for a while, so she was well aware of the dangers that lie out in the open water. This sometimes includes huge icebergs! Thanks to the Titanic, we all know that even when an iceberg seems to be far away, it can be catastrophic for a boat of any size.

Icebergs are a common sight off the coast of Labrador. As the water in the area heats up, iceberg sightings are actually increasing, with large chunks of arctic ice drifting south earlier and earlier each season.

Mallory and her shipmates stayed on course but remained alert to the danger of the ice around them. When the crew is in these dangerous situations, they need all hands on deck to ensure that they are safe and don't drift towards the glacial giants.

Some of the animals that live on icebergs include seals, penguins and polar bears. It isn't out of the ordinary for Mallory and her crew to witness these animals on their trip, and if they don't interact with them, they can both enjoy the ocean landscape without any altercations. But what they were about to see didn't live by this code.

On one fateful day, they were fishing for crabs when they came across something very different. On a large (but rapidly shrinking) chunk of ice, they spotted an unusual animal...

From a distance, the fishermen thought at first that the critter was an arctic seal, lounging casually on a floating iceberg that had almost entirely melted out from under it. But when they got closer, they began to worry...

It was no seal. The creature was small and furry, and it looked scared. And it was right to be afraid, because it didn't have long before its icy perch would break down entirely. The crew was scared to, because they weren't sure how this animal would react to their presence.

When the boat got close enough, the fishermen realized they'd found a tiny, cold arctic fox. It was clear the fox shouldn't have been that far out to sea alone, and there was no way it could swim back to shore if it fell off the iceberg...

The team suspected that the fox may have been hunting when something went horribly wrong and it got trapped on the wrong side of a glacier's fissure. Once the iceberg started floating away, there was nothing the fox could do but remain aboard as it headed farther and farther out to sea...

The trio rescued the fox, who was starving and very cold, and gave it a warm bed filled with sawdust while they transported it elsewhere. The fox was incredibly wary of the humans, but, with some persuasion, it was convinced to remain calmly on the boat.

There's not much food aboard a fishing boat that would be fit for an arctic fox, but it was clear the little creature was in desperate need of sustenance. Eventually, the trio fed it Vienna sausages, the only semiappropriate, meaty snack on the boat.

The fox snuggled down for a rest in its temporary bed and managed to get some sleep. It probably wasn't able to rest very much on that iceberg, so this nap was long overdue...

In no time at all, the fox began looking a lot healthier, or at least less like a drowning rat. Notice the animal's black skin, similar to that of a polar bear, which traps as much heat as possible while its white fur provides camouflage in the snow.

Eventually, the fox realized the humans didn't mean it any harm. But it was still wary. Little did it know those humans were going to take it to a new home where iceberg-surfing accidents would be far less common...

The fishermen found a new home for the fox: an old doghouse on the side of a barren hill overlooking the sea. It was the perfect place for the animal because it was far enough away from humans to keep it safe.

The fox seemed to appreciate the small, enclosed space of its new home as it sniffed around the tiny hut. Then, clearly feeling a bit bolder than it had upon the top of the iceberg, it began exploring its surroundings...

While this area is grassy in the warmer months, it's covered in thick snow during the winter. Which should be perfect for the tiny fox. It's a shame the fox won't be able to make its way back to its original home, but considering its iceberg fail, this might be for the best.

Wanting to get a better look at its surroundings, the fox zoomed up to the top of a rocky outcrop. Meanwhile, its rescuers watched from a safe distance, filming the fox's first few moments of freedom...

Suddenly aware that it wasn't alone, the fox turned back to lock eyes on its human friends. It was a good sign that, rather than returning to ask them for more tasty sausages, the fox turned and ran further away. Clearly it hadn't become too attached to humans as a result of its ordeal. Which is good for its future health and safety...

Unfortunately, animals like this fox are increasingly feeling the negative effects of climate change. And it's only going to get worse in the coming years. Scientists estimate that rising sea temperatures will rapidly deteriorate the remaining ice at our planet's poles.

The Day Is Saved

Thankfully, this little fox was safe and able to dash away into the thick grass of its new home. But not all arctic animals will be so lucky. We hope people like Mallory Harrigan and her friends will be on hand to rescue more animals who may end up in danger. But they can't be there for all of them...