These Are The Toughest, Coolest, Most Badass Women In Halloween Movies

Sheila Watko
These Are The Toughest, Coolest, Most Badass Women In Halloween Movies October 27, 2017 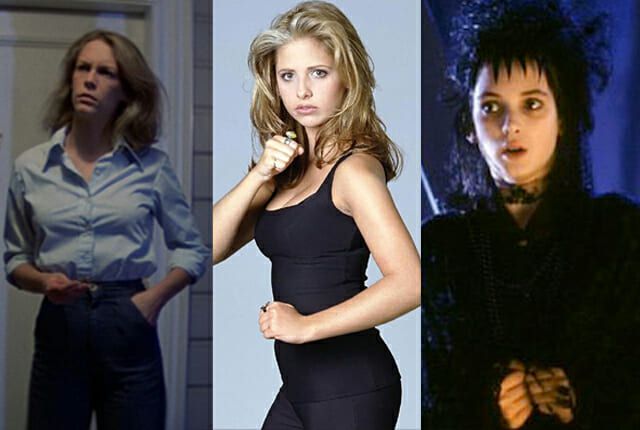 Some seriously badass ladies are featured in our favorite horror, sci-fi and fantasy movies and TV shows. While some of them kick the bad guy’s ass, others are the bad guy. Some have hearts of gold, some are evil to the core, but all of these badass women in Halloween movies slay the game in their own way. WARNING: SPOILERS AHEAD.

Laurie is such a badass in every way. Looking at the original Halloween movie, she is a shy, brainy babysitter who is just trying to watch little Tommy Doyle on Halloween night (she even agrees to watch her friend’s charge while her friend ends up getting murdered) and ends up stabbing Michael Meyers in the neck, stomach and eye. She’s the ultimate scream queen.

Obviously final girl Sidney Prescott and unexpectedly brave Gale Weathers are cool as hell and kick some serious Ghostface butt, but let’s have a moment of silence for Tatum. Yes, she died a tragic cat-door death, but she fought back hard against Ghostface (one of whom was her boyfriend!) in the garage and did it with sass and wit to boot.

Willow, Tara and Anya are all powerful ladies, but Buffy goes through so much throughout the series – Hellmouth demon-fighting stuff AND normal teenage angst stuff – that she’s one of the strongest women ever to appear on TV. She kicks vampire ass, regularly saves her friends/little sister/boyfriends, deals with the death of her beloved mom AND looks phenomenal in late 90s/early 2000s outfits through all of it.

Wendy seems to start off as a passive, meek, traditional wife and mother. She is Jack’s punching bag, but she is a good mother to Danny and is protective of him after Jack hurt him during a drinking binge. Once Jack loses his mind, Wendy is surprisingly tough and resilient. She slashes Jack’s hand with a knife, locks him in a freezer and saves Danny by pushing him through a window to take refuge in the snow.

Lieutenant First Class Ellen Louise Ripley is the only one of seven crew members on the Nostromo to survive the Xenomorph. She is smart, strong and determined, and it pays off. In later installments she literally kill monsters with a child on her hip. It’s worth noting that Ripley wasn’t originally meant to be played by a woman, but we couldn’t imagine her any other way.

Winifred, Mary and Sarah are a sassy, hilarious, evil three-for-one deal. They wreak havoc on partying parents, torment virgin teenage boys, turn kids into cats and are totally cool with killing young children, but they also do a mean rendition of Screamin’ Jay Hawkins’ “I Put a Spell on You.” They’re fabulously frightful and totally badass.

Clarice Starling (The Silence of the Lambs)

Clarice is still just a student at the FBI Academy, but she coaxes information out of Hannibal Lecter (while admittedly making a stupid mistake and giving him personal information about herself) to track down serial killer Buffalo Bill, evades Bill in the basement while he has the benefit of night-vision goggles and manages to fatally shoot him, saving Catherine Martin from becoming a skin suit. I mentioned she’s still a student, right?

Lydia is a quirky goth girl who is kind, witty and smart and has real-world teenage struggles with trying to get her dad and stepmom to understand her. Her interest in the paranormal allows her to bond with the Maitlands and that friendship helps her become more confident in herself, which is a super relatable and badass accomplishment. Plus, you know, she escapes a forced marriage to the Afterlife’s Leading Bio-Exorcist and can dance mid-air to “Jump in the Line.”

People hate on this movie, but Ivy is a solid heroine without even realizing it. She’s incredibly kind and takes special care with the developmentally-disabled Noah. When Noah tries to kill Ivy out of jealousy (the whole situation is sad and nuanced), she fights back and successfully kills him while being completely naive to the fact that he is a human and not a horrible monster. She escapes, gets medicine for Lucius, brings it back… and does all of this as a blind woman without access to any modern science.

Baby Jane Hudson is insane and let’s be honest: Blanche kind of sucks. She has so many chances to scream out the window or escape while Jane is away and instead she cries in her room and weakly throws a paper note out the window one single time, which of course doesn’t work. But Blache’s caretaker Elvira is low-key badass. She knows something shady is up and tries to rescue Blanche, but is unfortunately killed by Jane with a hammer.

In the first installment of this series, Nancy is a mere 16-year-old girl just trying to live her life, but her best friend gets killed by Freddy Krueger, so she has to take matters into her own hands. She lives on caffeine as all her friends die and then gets Freddy into the real world so she can kill him with her traps because she’s a badass teen.

Grace Stewart (The Others)

Grace is a super religious woman, a widow and mother of two kids who are dangerously sensitive to light, and she works pretty well with the cards she’s been dealt. She thinks her house is haunted and tries to keep her cool, and she constantly tries to protect the children from whomever is opening the curtains. We find out that she actually killed the children and herself, but she attempts to fix the situation by learning to live alongside the living and continuing to be a good mother to the kids.

Sally (The Nightmare Before Christmas)

First of all, how badass is it that she can jump off a tower then just casually sew herself back up? She escapes the evil doctor by poisoning him and she tries to prevent Jack from leaving to the extent that she gets captured by Oogie Boogie. Plus, she’s got a beautiful singing voice.

Amazing Amy is a cunning, cold-blooded murderer, let’s get that out of the way. She shows no remorse in killing Desi, but when it comes to seeking revenge on Nick, she’s kind of a badass. She moves from the home she loves for Nick, she buys Nick’s bar and she puts up with his laziness while he slowly turns her into someone she doesn’t want to be… all to be cheated on. So she sets up a whole ruse to make Nick look like a murderer and then impregnates herself with his sperm sample so he’s stuck with her. She’s obviously evil, but if that isn’t a good revenge fantasy, what is?

Wednesday is a tiny little badass who has a good heart (deep down) and is very close to her family, but she’s got quite a dark and feisty streak, too. Tbh, this photo is the only proof need.

Annie Wilkes is abusive, which is unacceptable, however, as a character, she’s fun in a horrifying way. She’s a crazed Paul Sheldon stan who manages to rescue him and his manuscript and tortures him when he writes profanity into his manuscript and kills off Misery, the protagonist. She makes the list because you have to be a tiny bit badass to pull off some of the crazy stuff Annie does.

The Wicked Witch of the West (Wizard of Oz)

Yes, she’s the villain. Yes, she tries to get Dorothy and her little dog, too. But she’s a strong independent woman who is heartbroken over the loss of her sister, the Wicked Witch of the East, whom Dorothy unintentionally and indirectly killed, so can you really blame her? She wreaks havoc on all of Oz with only her broom and her team of horrifying flying monkeys, so yeah, she’s pretty badass.

Carrie is an underdog in every sense: bullied by her peers, emotionally abused by her cruel, fanatically religious mother. She kills a lot of innocent people during the prom fiasco, but she also uses her newfound powers to kill her horrible mother when she tries to murder Carrie.

Aggie is a fabulous grandmother (perfectly portrayed by the late, great Debbie Reynolds) who floats around in glittery cloaks teaching her grandkids all about her favorite holiday while trying not to fully reveal the family secret. The best part? She’s a powerful good witch from a magical town and wants to train Marnie to be a powerful witch, too.

She's a woman on a murderous rampage, but it’s all to avenge the drowning of her son Jason. Jason was born with microcephaly when Pamela was just a teenager and died after other kids teased him about not being able to swim. So yes, she’s a murderer, but there’s something badass about a mother’s love that strong.

Peg makes the list because what’s more badass than a suburban Avon lady welcoming an outcasted stranger with blades for fingers into her home? She’s a working mom who sees Edward as he is, a kind, lonely soul. She insists on including him in family activities and even sticks by his side when he’s framed for a crime.

Even though Kevin Wendell Crumb (as The Beast) ends up killing her, Dr. Fletcher makes the list because she was so invested in her patient that she to go to his lair in hopes that she could figure out what was going on with him. Unfortunately for her, this was a stupid move and she should’ve at least had some police wait outside, but she didn’t want to destroy his trust in her. She died for her cause, and she left a note for Casey with instructions to say Kevin’s full name, which helped buy Casey time.

These former burlesque actresses are now Coraline’s hilarious elderly neighbors, still fabulous as ever. They love their Scottie dogs, which they stuff and place around the room when they die, and they still perform in the Other World. Without knowing it, the ladies help Coraline immensely by giving her a tool to find the ghost children’s eyes buried in their old bowl of candy.

She’s barely in first grade, but this mini badass had to make the list. She’s deaf and uses sign language to communicate with her family. She is quick to welcome Esther, but also quick to stop her from killing Daniel. The little cutie even attempts to shoot Esther to save her mother. The poor thing will probably be scarred for a long time, but she’s tough af.