Sophie Dunne
German Woman Finds Her Grandaunt’s Shocking Belongings in a Safe in Her Attic February 4, 2020Leave a comment 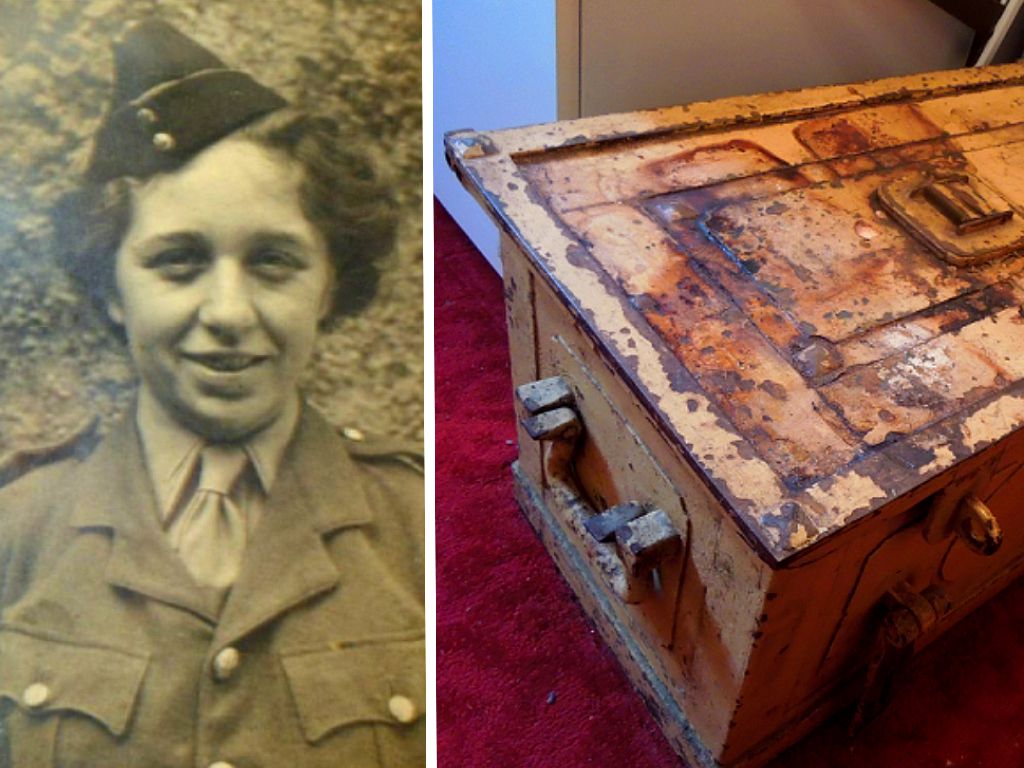 When you inherit a house from a family member who has died, you might expect to come across the usual old family photos and sentimental personal belongings. However, when a woman in Germany inherited her grandaunt’s house, she would discover something shocking that would make her question if she ever really knew her aunt at all...

While rummaging through her grandaunt’s house after inheriting it, one German woman stumbled upon a big, old rusty metal trunk. Although she had no idea what was inside, she knew the contents had to be valuable because of how the safe’s heavy bolts were locked tight.

Nervous to Uncover the Contents of the Safe

Sitting in the empty house and being face-to-face with her grandaunt’s secrets, the woman was certainly apprehensive about the contents of the heavy, metal box. As the safe was so securely shut, anyone would be spooked to open something that was obviously meant to stay closed.

How Would She Open It?

At a glance, the woman knew she would have a difficult task on her hands if she tried to open the safe, which led her to worry about what could lie inside this mysterious box. Fortunately, luck was on her side and she finally found the key.

Even though she had the key, the rust covering the safe made her doubtful to whether or not she would be able to open it. But as soon as she tried, presto! The safe was open, as if it was still the century that the safe had been crafted in.

When she open the safe, the woman noticed nothing surprising jumping out at her. In fact, all she saw was an empty tray, but knowing that something could be hidden beneath the tray intrigued her more. Why would her great-aunt have gone to such great lengths to hide her belongings?

She Continued Her Search

When she lifted the tray, the woman discovered some random objects inside that made her question why her grandaunt would hide them in such a secure location. Surely an old tin of Nivea moisturizer wasn't so valuable that it should be under lock and key.

A History of Personal Belongings

Inside the safe’s second compartment lay a bunch of old photographs, postcards and books. It was only when the woman examined these items more closely that she discovered something surprising about her grandaunt’s past.

What She Knew About Her Grandaunt

The woman knew that her aunt had fled Russia in the 1940s during the Second World War and settled in Hamburg. However, her life in Germany during this time may have been controversial if she felt the need to hide these belongings from her family for years.

A Closer Look Shocked Her

The woman did not recognize all of the faces in the photographs however, she did unsettlingly recognize the title of one of her aunt’s books, Adolf Hitler’s "Mein Kampf."

Although publications of Hitler’s book are not limited and copies are easy to find, the fact that it was in her aunt’s possession during the time of Hitler’s reign concerned the woman. After doing some research, the woman could tell that the book was published in 1943, just before the end of WWII.

Is It Worth Selling?

A book like this could be auctioned for its historical context and could possibly sell for approximately $350. However, the book is still a manifesto for Hitler’s ethnic cleansing and represents the brutality and terror of Europe when he was in power, so the woman felt torn about profiting off of it.

While rummaging through her aunt’s belongings, the woman also came across a much used, dog-eared copy of the classical novel, “Rob Roy” by Sir Walter Scott. The simple feel and smell of the book made the woman feel like she was back in time.

She Even Found Disney Classics

Among these books and photographs, the woman’s grandaunt even had a copy of the novella "Lady and the Tramp," before it was adapted into the screenplay we all know and love.

"Lady and the Tramp," The Book

The copy of “Lady and the Tramp” found in the secretive, metal safe was published in German in 1953, just two years before the release of the movie. It baffled the woman to think why a Disney classic would be hidden away with Nazi paraphernalia.

She Questioned Who Was in the Photos

Looking through the many photographs hidden away in the safe, the woman was not exactly certain who was staring back at her but she guessed that the young girl was her grandmother. Even so, she was emotionally moved just looking at the faces of her family from the past.

She Found Photos of Her Young Grandfather

The woman was emotional to find pictures of her grandfather in the 1950s while he was in his prime and riding a motorbike, bringing her face to face with her own family history.

While continuing her search through her aunt’s sentimental belongings, the woman found photos of young boys who seemed to be part of Hitler Youth— an organization for young boys within the Nazi Party.

She Didn't Recognize Their Faces

Already shocked to find photos of young boys who had been recruited by the Nazi Party, the woman was confused as to who the people in her great-aunt's photographs were. Trying to identify the faces, she assumed they had a close relationship with her great-aunt and may have been family members because of how safely the pictures were kept for decades.

A Stack of War Membrobilia

As well as finding books from Hitler’s reign of terror, her niece also found a plethora of war related documents. Among the memorabilia, she found political propaganda, media articles and plenty of war related postcards.

Postcards From the War

The woman’s grandaunt had a postcard from 1916 of a soldier kissing a woman before he left to fight in the war. The sad truth behind her aunt's personal belongings is that most of the contents were related to war, showing us the heartbreaking reality of living in Europe during that time.

Under the Watch of the Nazis

Hidden away in the safe, the woman’s grandaunt kept many postcards that clearly showed the Nazi government stamp on that back. In Germany during the time of Hitler’s reign, these stamps were necessary when sending mail which meant that the government always kept tabs on what you sent and who you were sending it to.

Another postcard that the woman found dated back to the First World War and showed two models posing as a soldier and a nurse in order to motivate young men and women to enroll in these professions.

News of the War Printed on Postcards

As there was limited access to media outlets such as radios and newspapers, news of the war was printed on postcards to bring as much coverage as possible to people. This postcard shows an image of a house destroyed in the war and below it reads, "A House Destroyed by the Enemy."

She Even Kept Her Moisturizer Tins

Going through her grandaunt’s belongings brought the woman in touch with the reality of 1940s Germany, especially when she came across her great-aunt’s tins of Nivea cream. It was unknown to her niece why she kept these safe, but nonetheless, they were a time capsule into the past.

This image, also found in the safe, shows the Kaiser's heir (German emperor) during World War I. Pictures similar to this one would have been commonly placed in German households to show respect for their ruler.