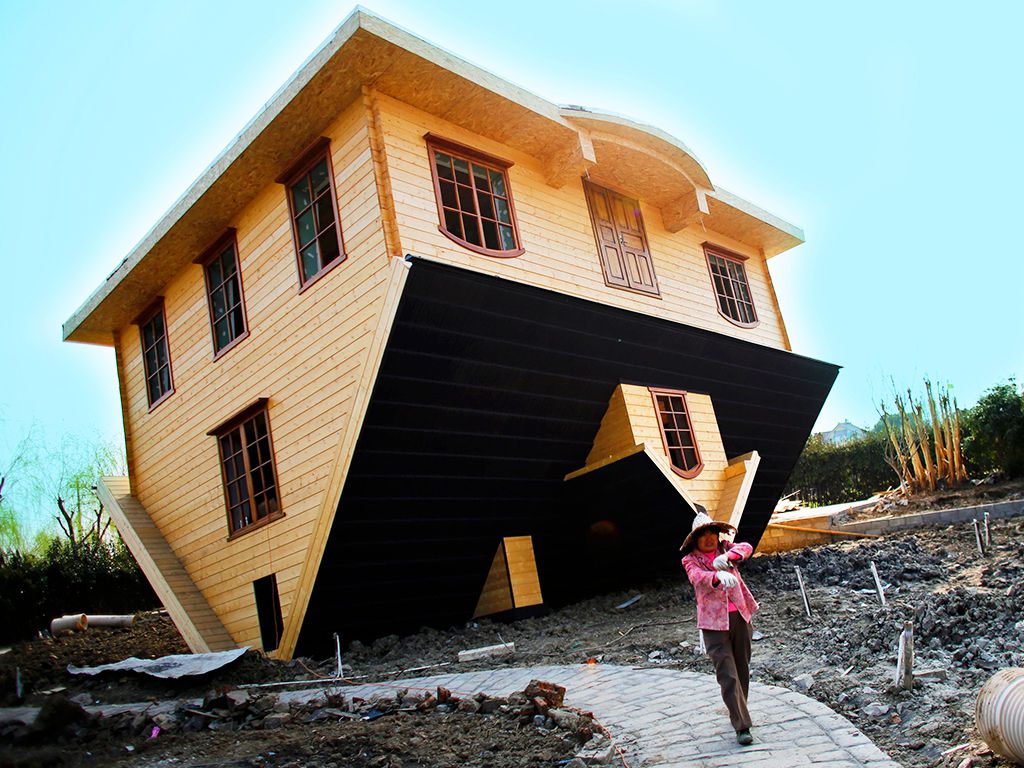 Construction is a ton of hard work. Engineers spend a lot of time planning and working on blueprints to create the perfect design. And can we talk about getting building permits for a second? They’re a total nightmare to acquire!

Even the most carefully planned construction project can turn into some of the most baffling fails we've ever seen before. Don’t believe us? Check out these hilarious construction fails and get ready to shake your head in disbelief.

Room With No View

Everyone dreams of having a room with a balcony so they can look out towards the neighborhood and feel like royalty. But don’t count on doing that at this house because the construction team installed an HVAC duct in front of the window.

Good Luck With That Mirror Selfie

Want to take a mirror selfie? Perhaps your makeup needs a little touch up? Well, don’t bank on using this bathroom mirror. It looks like someone tried to repair a broken mirror by overlaying a new one on top. But anyone who uses it will feel like they’re in a house of mirrors at an amusement park.

Do Not Have an Emergency Here

Have an emergency? Need to make a phone call? Well don’t count on this phone to help you. The emergency phone is out of service. But shame on you for not living in the 21st century and owning a smartphone.

If this emergency exit means the difference between life and death, then we hope you have life insurance because you’re never getting out of here alive. Some genius decided to build a brick wall that’s blocking the exit. All we can say is... why?

There’s No Way Out

You might be able to get down, but climbing back up is going to be a challenge. You’ll have to be very tall and athletic, or some kind of mutant to get back up. That’s because whoever set up those ladders didn’t line them up perfectly.

Here’s a great example of how even the best intentions can turn into a disaster waiting to happen. Someone installed this road sign that says “Give cyclists space,” but the sign itself is blocking the bike lane. So, a cyclist would have to ride around the sign and risk getting hit by a car because there’s no space in the lane.

We're not sure who built what first. Was the pillar there before the fan or did they install the fan first and then the pillar? Either way it’s baffling how no one realized that the fan can’t do its thing with that pillar in the way.

Soap Dispenser in the Mirror

Most public bathrooms place their soap dispensers on the tile wall, but for some odd reason, this dispenser is stuck to the mirror. Maybe it was designed to get people to focus less on their looks and more on washing their hands.

Talk About Some Serious Overtime

There’s a clock on top of this clock. This seems a little excessive, doesn’t it? Why would anyone feel the need to do this? Couldn’t they have added the smaller clock somewhere else? Well at least no one in this building can complain that they don’t know what time it is.

Bike paths ensure riders have their own lane so they won’t get hit by a car. But some bike paths can be deceptive, like this one, which leads straight into a safety rail. Whoever designed this must have a serious grudge against bikers.

Duct Tape is a Temporary Fix

People say that duct tape fixes just about anything, but this is insane. Someone decided to fix this telephone pole using only duct tape. But this is just an accident waiting to happen and there isn’t enough duct tape in the world to keep this pole from falling.

When some construction workers installed this drain pipe, they realized that they made the hole a little too big. They could have mixed some concrete and patched the space above the pipe, but that was clearly too much work. So instead, they placed three bags of concrete mix in the space and called it a day.

If you’re trying to get to the second floor, then you better hope that there’s an elevator in this building. The staircase isn’t going to get you far. Whoever designed these stairs needs to look for another line of work.

Watch Out for the Pole in the Road

We’ve all heard of the proverbial fork in the road. But the much more literal pole in the road is very dangerous. You can just imagine a distracted driver texting someone and not seeing this pole until it’s too late.

Seat With No View

This guy must have bought his ticket at a discount, but it wasn’t worth it. This may very well be the worst seat in the stadium, and it’s easy to see why. There’s a gigantic pillar in front of the seat that makes it impossible for any spectator to see the game.

Whoever built this fire escape into the building had no intention of allowing anyone to survive a fire. It’s easily accessible from inside the building, but it’s not long enough to even get to the next floor let alone the ground floor. They might as well put a sign that says, “In case of fire, leap to your doom.”

If you’re trying to climb into this building’s window by using this spiraling stairwell, you’re going to find yourself very disappointed. The same goes for anyone who is trying to get out through that small hatch on the wall. You’re either going to have to phase through the wall to get in, or climb out from under the stairs and take your chances when you jump.

Bathroom stalls are so impersonal, aren’t they? Who wouldn’t want to have their best friend or significant other right in front of them while they’re doing number one or two? If you don’t mind the stench or your personal bubble bursting, then maybe this construction fail is more of a win.

This Bathroom’s Way Too Public

This door put the word public in public bathroom. The fact that the toilet’s positioned in front of the door is bad enough. To make things worse, the door has a rectangular window in the middle. No one wants to see another co-worker doing their business, which any construction worker should already know.

It looks like Doug is having an off day and doesn’t know which sign to change, so his piece-of-work boss decided to make it obvious by personalizing a message on the sign that would be impossible for Doug to miss.

These Road Lines Are Too Curvy

It looks like drivers aren’t the only ones who should have their sobriety tested. Whoever painted these road lines must have had too many beers during lunch. Just imagine all the drivers that are going to struggle to stay in their lane now.

No Showerhead? No Problem

This person needed a new shower head, so they came up with this contraption that consists of a beer can with a slit on one side for water to flow out, and lots of duct tape and a string to keep the can-turned-showerhead from falling off.

This Column’s a Death Trap

There’s been a lot of major construction fails on this list, but this one’s really messed up. This column is being held together by pieces of wood and lots of Do Not Cross yellow police tape. From the looks of it, even the slightest gust of wind could send this column crumbling down along with the ceiling it’s barely holding in place.

The Worst Place for a Microwave

There’s nothing more disappointing than spending lots of money on a nice microwave only to realize that it’s impossible to get the door open once it’s installed in the wall cubby. How is anyone supposed to heat up their Hot Pockets like this?

The bad thing about DIY construction and home renovation is that most people don’t pay attention to the small details. Take the location of this sink for example. It’s too close to the door, so the homeowners had to cut a piece of the door out entirely so they wouldn’t bang into the sink every time they opened the door.