How to Pose for Pics and Look Instantly Snatch

Camila Villafane
How to Pose for Pics and Look Instantly Snatch July 1, 2019Leave a comment 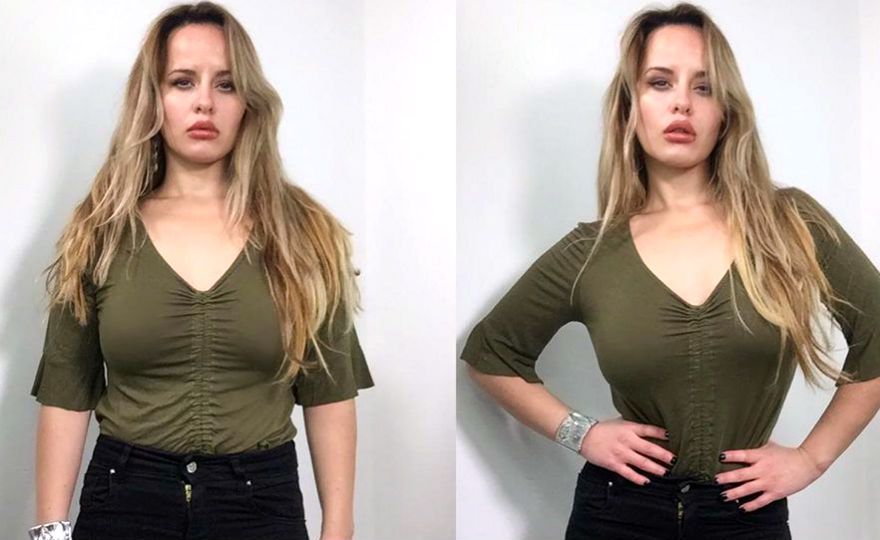 Wanna look great in your Instagram or Facebook pics? You have to pose like a pro. But knowing how to hold your body isn't the only way to look like an IG model. Maybe you're using bad lighting, or pressing your arms against your torso, which makes you look 10 pounds heavier. See? Bet you didn't even know that was a thing...

Avoid direct sunlight. It's harsh on your skin. Find natural overhead light by a window when the sun's above you, or snap pics outside when it's slightly overcast. Also, use a ring light. YouTubers and IG models are obsessed with them because they casts circular light that eliminates shadows.

One Leg in Front Makes You Look Natural

If you have no idea about what to do with your body when someone picks up a camera, remember this trick: Stick one leg in front. It'll make your body look more elongated and looks 100 times better and less awkward than standing there with your arms to the side and your legs straight.

Posture is important. So even if it feels awkward as hell, stick your neck up and then stick your face forward. You don’t have to go overboard to the point where it starts to hurt. Chill. Breathe. Now smile with your eyes and push your face forward slightly so your double chin remains hidden.

Be Careful Where You Place Your Arm

Don’t squish your arms against your body. It looks awkward and makes your arms wider. And if they're shooting you at a 45-degree angle, you'll look so disproportional that you'll want to delete the entire photo shoot. Put your hands on your hips or play with your hair. You'll look more relaxed.

Find inspiration in poses you see on Instagram and Pinterest. (Yes, people actually take the time to do this. Guilty as charged!) Then stand in front of a mirror and mimic what you saw, finding your most flattering angles so you can take a pic that would make Tyra Banks proud.

Teach Others How You Want Your Photos to Be Taken

If you want to look thinner and more elongated use a high angle when taking the photo. But make sure to open your legs wide. This makes you seem a lot more proportional and instantly takes off five pounds. Also, crop the photo mid-thigh when you’re done. Hello, skinny legend!

Want to look taller? Have the person taking the photo from a lower angle to give you the illusion of height. But make sure to adjust your chin the way we described earlier so you end up winning, and not double chinning.

Try to Look as Relaxed as Possible

To look like you're totally relaxed in front of the camera, practice different facial expressions until you find one that suits you. Smile with your teeth or without them. Try smirking or frowning a little. Play with your face shamelessly while listening to empowering music. While you're at it, find the best side of your face and angle it in that direction.

Add Some Movement to Your Pics

Instead of imitating an old-fashioned supermodel pose, try looking more casual by getting some movement in the shot. Have a friend follow you and take multiple shots while you walk around, twirl, and play with your hair. That way the shot looks more candid and in the moment.

The rule of thirds involves dividing your image mentally using 2 horizontal and 2 vertical lines. You position the important elements in your scene along these lines or at a point where they meet so you can take a well-balanced photo.

Since most of us don’t have a perfectly symmetrical face, it’s best to not face the camera head-on. Instead, turn your head 3/4 to the side to add more dimension to look even more beautiful. As if that's even possible, I know!

Usually, a 45-degree angle looks great on everybody because you’re not simply square on. You’re turning your body slightly, which gives the impression of neverending curves and angles. Now some people look great when they're standing straight, but if you’re not sure, stick with this rule.

Here’s How to Avoid Looking Awkward

If you don’t know what to do with your arms and legs, consider sitting on the ground, a flight of stairs or a bench. It makes it easier to pose. Also, don’t squish your torso to the side. Make sure to elongate your back and keep it straight, but not to the point that it looks like you were in a car accident.

Use Your Arms to Make Your Silhouette Work

Create a modern vibe by moving your arms around. Be sure to use them in ways that benefit your silhouette. Cross your arms or put one on top of the other instead of having them by your side. You could hold your glasses or a purse with one arm while wrapping the other around your waist.

Find a prop. Something as simple as a coffee cup, a tiny bowl of ice cream or a book will give you something to do with your hands. Glasses, hats and handbags are good props too. They'll make your photos look 10 times cooler and more natural.

Find a cool wall and lean back. Leaning gives you something to do with your body. You can also throw one foot up on the wall while you’re at it. It’s better than just standing stiff as a board.

Always elongate the body, especially if you’re taking beach photos where your tummy’s showing. Sit at an angle on a stool or a beach bed like a mermaid and this will elongate your body.

Old school supermodels used to bring emphasis to the waist by putting their hands on their waist. But what girls all over Instagram are doing now involves a similar technique except you would put your hands closer together to create a more defined waist. Facetune, who?

In Live Mode your iPhone takes a 1-second snapshot for an image, so when you go back it will look like a short video that you can scroll through until you find the shot you feel makes you look gorge.

Over the Shoulder Pose

The over the shoulder pose works for every body type. Have your back mostly towards the camera and look back at it and do some cute expression. As a bonus, this will give you a more defined jaw when you look back. And if you have a double chin, your shoulder will cover it.

Edit the Heck Out of Your Photos

Use high quality editing apps like Inshot, VSCO, Afterlight, Snapseed, Foodie, and UltiMatte. They’ll help you change the feel and vibe of any photo without making you look like some a mannequin. But, you know...if you do want to look like one, (because why not?) try Facetune and Snow. They allow you to shrink, elongate your body and even plump up your lips.

There are a number of locations you can take photos in whether it’s indoors or outdoors. How nice the location truly depends on where you’re living. But avoid crowded places and if someone shows up, Photoshop them out of your pics.

To get a genuine smile, think of a funny joke or a hilarious experience you had that will crack you up because fake smiling just looks weird. But remember that a smile, genuine or not, will really come through the lens.

Slouching Will Make You Look Bigger

If you’re slouching, your chest will look droopy, your body will be rounder, and it will make you look heavier, (in all the wrong places!) So, stick your chest out, square off your shoulders and smile to get the perfect photo.