Matthew Loffhagen
His Students Immediately Took Out Their Phones and Started Recording When They Saw Their Professor March 2, 2020Leave a comment 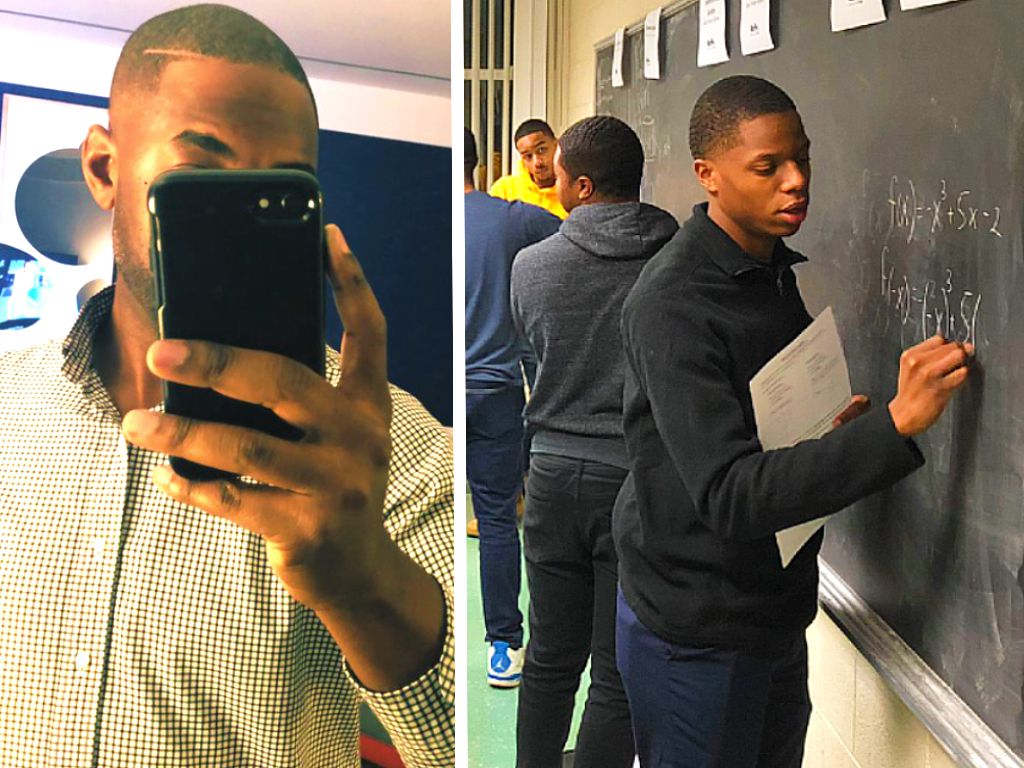 When Wayne Hayter brought an unexpected guest to his college math class, he couldn't have predicted how his lecturer would respond. What happened next had Hayter's classmates taking out their phones and snapping photos of the experience; something the professor will never forget as long as he continues teaching.

Professor Nathan Alexander teaches math at Morehouse College in Atlanta. When one of his students came to class with an unusual request, he was more than willing to help.

Morehouse is a historic institution, having opened its doors for the first time in 1867 and producing such noted alumni as Martin Luther King Jr. himself. While times have changed in the years since the college was first established, some of the students' challenges have remained the same.

The Pressures of Education

Student life can be a complicated experience, involving carefully balancing work, education, family and social events. Sometimes, the pressures of daily life can get in the way of a student's ability to learn.

With midterms approaching, student Wayne Hayter was eager to attend a lecture that would cover some of the material he would need to know for his test. There was just one problem: he was double booked.

A Child In Need of Care

At the time that Hayer was supposed to be attending professor Alexander's lecture, he also needed to care for his daughter, Assata. This tiny little girl was just a few months old, and needed her daddy.

Hayter and his wife Firda are trying their best to provide Assata with the best possible start in life. Part of that means lots of one-on-one parent time, and that involves Hayter getting a world class education so that he can provide for her in the future.

Parenting as a Team

On this particular day, Firta had an important appointment to pick up Assata's birth certificate. She couldn't take the baby with her, but the family was also unable to find childcare to cover the time Hayter needed to attend his lecture.

Hesitantly, Hayter strapped his daughter onto his chest and headed to class. He hoped that his professor would be understanding about having an extra student crash his class.

Hayter hesitated at the doorway, worried that Assata's presence in the room might disrupt the class. He didn't want to negatively affect everyone else's education just because he had parental responsibilities.

Welcoming to All Students

When Alexander saw Hayter hesitating, he welcomed him inside with a big smile. Assata was perfectly welcome in the classroom. Although, the professor did notice one problem that Hayter was facing as the lecture progressed...

Hayter was having a hard time taking notes while also holding his daughter. She was quite a handful! So, professor Alexander made an offer to help Hayter's note-taking go a little more smoothly.

Alexander offered to hold Assata so Hayter could listen properly to the lecture. At his professor's insistence, Hayter strapped his daughter onto professor Alexander's chest. But, would Assata appreciate all of the additional attention, or cause a disruption for the other students in the class?

After a short delay, Alexander continued his lecture with Assata snuggled comfortably in front of him. He was able to continue writing on the board, and the baby was perfectly content.

Fellow student Nick Vaughn was amazed to watch his teacher multitask. He was also doing his best to swat up before midterms, and was grateful for such a talented and thoughtful professor.

Vaughn was so impressed that he pulled out his phone and snapped a few photos of Alexander at work. He posted them online later, expressing his amazement at the unusual lecture.

In the pictures, professor Alexander can be seen casually answering students' questions while simultaneously pacifying and calming Assata. His effortless multitasking and relaxed demeanor are things any parent would be jealous of!

In captioning his photos, Vaughn said, "Student came to class today with his child due to no babysitter or anybody to watch her while he was in class. My professor NATHAN ALEXANDER said “I’ll hold her so you can take good notes!”

Professor Alexander's kindness and capable babysitting meant that everyone in class was able to learn and prepare for their upcoming midterms. They also gained a new level of respect for their professor.

Alexander later stated that he didn't think what he was doing was all that remarkable— Assata was fairly relaxed, so there were no problems. "She was so sweet, y'know, and she had a pacifier there, and I was sort of rocking her half the time when I was doing some equations."

A Photo for Mom

Vaughn's initial thought in taking the photos was that he wanted to show them to his mother. To his surprise, they were seen by far more people, as his tweet soon went viral.

The tweet received over three hundred thousand likes, and was retweed over seventy thousand times. Many prominent celebrities, including director Ava DuVernay, commended both Alexander and Hayter for their dedication to learning and to helping Assata feel comfortable.

Hayter says that he will never forget the kindness shown to him by his professor. To Hayter, the message is that he, as a young father, is seen and accepted even as he works to receive his education.

Alexander is a strong believer that his role as an educator means more than just giving his students facts to memorize. He's heavily involved in building a rapport with his students, whether they're in the classroom...

...Or visiting Six Flags! Seriously, why can't more teachers be like Alexander?!

Professor Nathan Alexander shows the kind of incredible connection that can be forged between teachers and students of any age so long as we're willing to look out for each other and help lift each other's burdens.