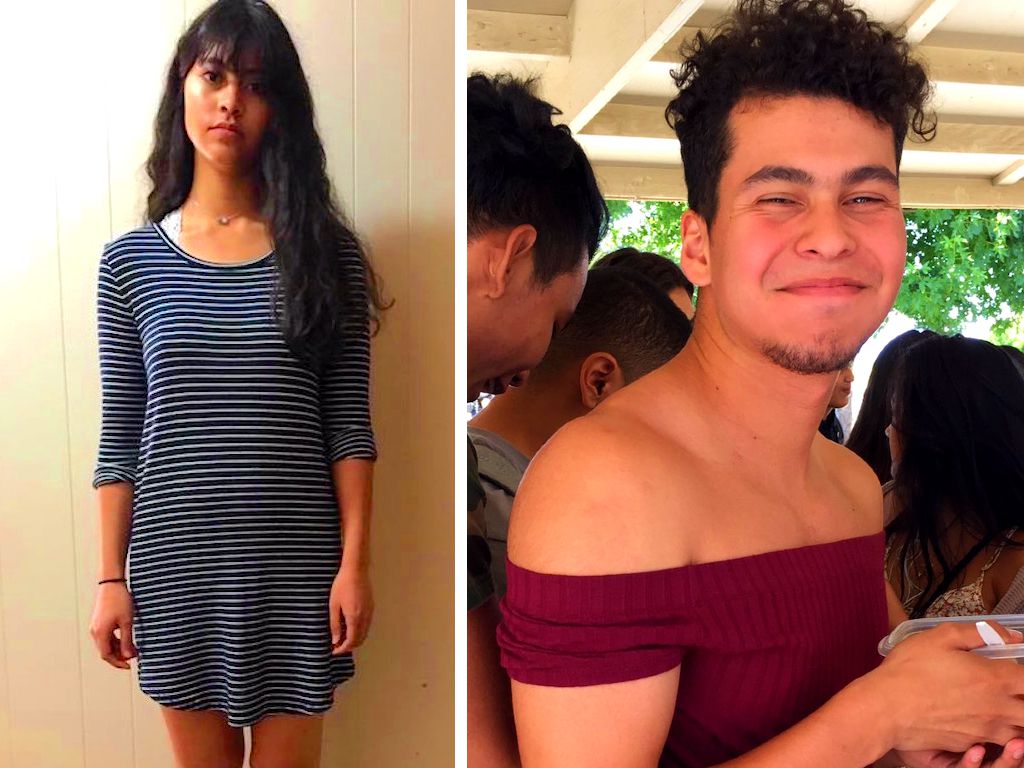 Students (who are mainly female) across America have been pulled out of class and humiliated for not complying with their school’s strict dress codes. However, these outdated, traditional views on "how to dress" have caused students and parents to revolt. More and more, we are seeing schools being called out for sexualizing, body shaming and discriminating students based on their outfits.

Tori Taylor was allegedly removed from class twice for wearing a crew neck top that "wasn’t the right cut of a crew neck top." Dickson County High School released a statement after the incident affirming that students must dress in a "Modest manner that does not distract or interfere with the educational environment of the school."

Twins Were Told to Take Out Their Braids

Deanna and Mya Cook have criticized dress codes for discriminating against gender and race. Adopted by white parents, the twins showed up to school wearing braids for the first time to identify with their African-American heritage. However, they were disciplined by the school for their hairstyle and told that their braids were "Inappropriate, drastic and needed to be fixed."

A seventh grade girl was allegedly told to cover up in class because of her t-shirt that read, "Why be racist, sexist, homophobic or transphobic when you could just be quiet?" Her parents insisted that the shirt sends an anti-discriminatory message but her teacher maintained that it was offensive. The school later admitted, "We realized that the shirt did not violate our policies."

Student Told to Put Duct Tape Over Her Ripped Jeans

In just one incident of ripped jeans violating the dress code, a student in Benjamin Stoddert Middle School was made to cover the tears in her jeans with duct tape. The student told her parents that the tape was burning her legs and the girl's mother asserted that the school did not even contact her to bring a change of clothes. The principal later apologized for the miscommunication.

A kindergartener in Minnesota was sent home in a different outfit than she went to school in after she was sent to the nurse's office and told she "needed privacy" and to "cover up." Her mother fought the school's administration for "sexualizing" her 5-year-old daughter and objectifying her body and soon the school's dress code was changed.

The Vice Principal Was Distracted By a Female Student's Pants

Kate Wilson from Honesdale High School in Pennsylvania was called "inappropriate" for wearing a baggy t-shirt and leggings. Wilson was told that her "pants were making the teachers uncomfortable and my vice principal made a point of how distracting it was to see me walk up stairs." Wilson criticized her vice principal for "the discomfort of a middle-aged man who seemingly can't keep his eyes off of a 16-year-old's rear end."

Boy Sent to Principal's Office for a Hole in His Jeans

Although we see more females targeted for dressing "inappropriately," male students are also among those being marginalized. Lori Ann Orr complained to her son's school after he was sent to the principal's office for "emerging holes" in his jeans. Orr says she struggles to pay rent so purchasing a new wardrobe every month because of a blemish in her kid’s clothing is not possible and she thought it was unacceptable of the school to take her son out of class because of it.

Kelley Anderson was reportedly told by her teacher to leave class because she violated the school’s dress code. She was accused of being "busty" and "plus-sized" for the outfit she was wearing. Anderson and her mother have since sought legal action to prevent other students from being body shamed.

In 2015, a student in San Jose spoke out against her school for pulling her from class and making her do a "fingertip test." This test is meant to show that the student's skirt, shorts or dress hangs down longer than their fingertip. The student and her mother fought the school's administration, arguing that the policy harmed girls and ultimately sexualizing them.

Teenagers Mallory Johnston and Grace Wood from Essex High School, Ontario recently protested against their school's policy that suspends girls for showing bra straps. The pair encouraged other students to dress how they wanted and hung posters in the halls that read, "Stop Objectifying Women." Johnston was since suspended for breaking the dress code during protest.

Student's Ripped Jeans Were a Distraction for the Boys

A student in Florida was suspended for wearing ripped jeans that violated the school's dress code. Her mother, Palm Beach County Mayor, Melissa McKinlay wrote in a Facebook post that her daughter was told "she needed to consider the guys in her class and their hormones when choosing her wardrobe" and she quickly called for the administrator's suspension.

A senior student in Illinois, Grace Goble was told to retake her yearbook photo because her off-the-shoulder top broke the dress code. Instead, Goble started a petition called "Maine South High School: end the over-sexualization of young women's bodies." In response to her petition, her principal asked her to be part of a team that would revise the dress code.

Student Blamed for Distracting the Boys

To prevent irritating her sunburn, Lizzy Martinez decided not to wear a bra under her top but was accused of distracting the boys in her class. Martinez later tweeted, "My school basically told me that boys' education is far more important than mine and I should be ashamed of my body." Braden River High School soon admitted that the incident should have been handled better.

A high school principal in South Carolina, Heather Taylor told her students not to wear leggings to school unless the student is a size 0 or 2. Students recorded her at assembly saying, "Even though you're not fat, you look fat." This caused uproar amongst parents and students who called her "hurtful" and "unprofessional" for body shaming her pupils.

Student Was Sent Home Because of Her Shorts

Casey Pearlman was sent home from school because of the length of her shorts. The teenager's case is yet another example of young girls in school whose bodies have been objectified, shamed and associated with promiscuity. In response, her mother challenged the school principal to "take her shopping herself," arguing that the problem is not the outfit, the problem is sexism.

Student Removed From AP Class for Wearing a Short Dress

Sophia Abuabara was asked to leave class for wearing a t-shirt dress that violated the school's rule of allowing only four inches of space between a dress and the knee. When the 17-year-old's mother showed up to the school with a change of clothes, she argued for the importance of her daughter's Advanced Placement classes over the length of her dress. Her mother was escorted off the campus but Sophia was allowed to stay in school.

12-Year-Old Was Told Her Skirt Was for Clubbing

Reese Franyo, a sixth grader from South Carolina, was told by her teacher that her skirt made her look like she should be out clubbing. When her mother called the school out for objectifying her daughter's body, she also pointed out that she made sure the skirt was the appropriate length before she purchased it. After measuring the skirt, the school admitted that it met the dress code guidelines.

Stephanie Dunn's mother was called to bring a scarf into her daughter's school because the teenager was showing her collar bone. When she arrived with the scarf to Woodford County High School in Kentucky, the principal said it was still "Too inappropriate." In a documentary made by the students of the school, the principal said that "distractions" among students "always comes back to what the girls are wearing."

Students at Boylan Catholic College in Illinois boycotted their prom because of the school's body shaming dress code. The school wrote strict guidelines that forbid female students with certain body types from wearing specific dresses. "Some girls may wear the same dress, but due to body types one dress may be acceptable while the other is not."

Student Was Told to Cover Up Her Dress with Sweatpants

Emma Stein from Evanston Township High in Illinois was told to change into sweat pants that went over her dress because her legs were too distracting. The student, who is now enrolled in University, recalled how every morning students were met at the door by security guards that would scan everyone's outfits to make sure they followed the dress codes.

One Last Jab at the School's Outdated Dress Codes

Victoria DiPaolo was "infamous around school for fighting the administration about dress code" and believed that society and schools penalize women for their outfits more than men. For her yearbook picture she decided to rebel against the school one last time, writing, "I'm sorry, did my shoulders distract you from reading this quote?"

In 2017 at California's San Benito High School, students of all genders wore off-the-shoulder tops in a protest against the school's dress codes and 50 students were reportedly sent home during the demonstration. One student told Yahoo Style, "I think it is ridiculous how we have to fight against [the administration] to wear a shirt that is not harming anyone."

Schools in Oregon Are on the Right Track

After increased dress code controversies in the educational system, the National Organization for Women designed a dress code policy for Portland Public Schools that do not degrade marginalized individuals. "Boys can dress like girls, and girls can dress like boys. You can be trans. You can be cis… whoever you are, you can wear whatever you want."

Body Shaming and Objectifying Are Huge Problems in Schools

According to Emma Roth, a fellow for the American Civil Liberties Union's Women's Rights Project, "We have seen dress code enforcement problems pop up all across the country. School administrators disproportionately enforce dress codes against girls and subgroups of girls — girls of color, gender non-conforming girls, trans girls, girls with curvier body types."

Schools are Guilty of Victim Blaming

It's time society stops shaming people for their clothes and quit enforcing the double standard that blames women for distracting men. Women are told to dress a certain way so that men can control themselves, a classic example of victim blaming; a view that is unfortunately ever so dominant in schools.