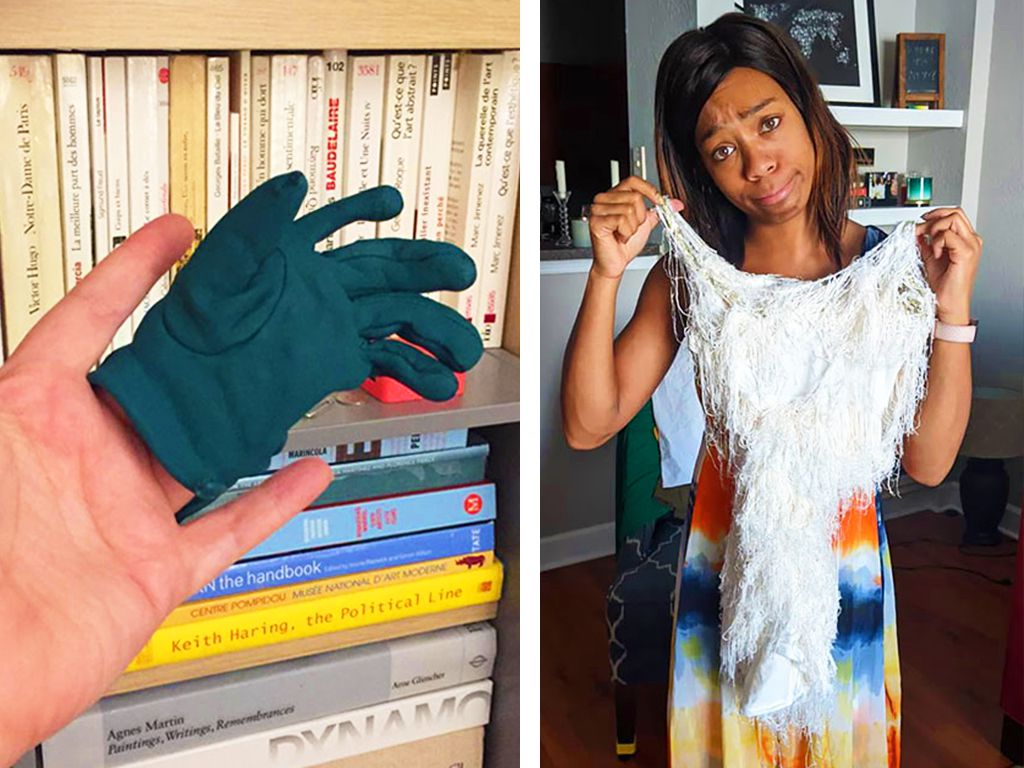 Doing laundry is a repetitive task that tends to get really tedious after a while. It’s basically the same thing over and over again unless of course, you get careless and mix your white and color clothes in the same wash and add bleach.

The truth is that laundry fails are more common than people realize, so here are a few hilarious laundry day fails that will have you rolling on the floor.

The label on this person’s pillow said “washing machine and dryer safe.” Well, it was certainly safe from the washer but this was the end result after they put their pillow in the dryer. Lesson learned. Never trust anything your pillow label says.

One Sock Didn’t Make It

The thing about doing laundry is that you never know what’s going to happen. Take these six socks for example. They were washed together. And yet, the one on the far left somehow shrunk while its other brothers stayed the same.

This was the first time this person ever did laundry. They thought it would be easy but then the machine burst into flames. Whatever they did, it’s really weird how they just stood there taking a photo instead of trying to extinguish the fire.

Honey, I Shrunk Your Favorite Sweater

This used to be Meredith’s favorite sweater. Keywords: Used to. It looks like mommy put the dryer on the wrong setting so the sweater shrunk. On the plus side, it looks absolutely adorable on her little sister, Ella, so it’s not a complete loss.

Washing Machine Ate Up the Socks

When the homeowners noticed that their socks went missing, they started doing a little investigating. And after opening the bottom of the machine up, they discovered that washing machines have an insatiable appetite for socks.

He Shrunk His Girlfriend’s Favorite Sweater

This is Oak, the dog, and he’s now the proud recipient of this sweater, which once belonged to the lady of the house. Unfortunately, her boyfriend tried doing something nice like taking care of the laundry and the sweater shrunk to doggy size.

The Dryer Worked a Little Too Well

This is a total nightmare. It looks like someone changed the dryer setting to crisp. Not only did it turn their clothes into an indoor campfire but it also damaged the machine beyond repair and might have damaged the other machines in the laundromat as well.

This guy’s burgundy sweater made him look a bit like Captain Kirk from “Star Trek.” But it didn’t fit him anymore after a laundry incident shrunk the sweater. Fortunately, it looked absolutely flawless on his girlfriend, who was just the right size.

He Shrunk a Wool Shirt in the Wash

This guy learned that you never wool and wash. But he wore it so much because it was his favorite shirt that it got really dirty. So, he didn’t think he had any other choice. But now he regrets it. Luckily, he was able to pass it on to his adorable pooch who loves his new shirt.

The Time the Gates of the Underworld Opened

All this person wanted to do was wash a bunch of rubber gloves. But once the cycle was done and he opened the lid, he discovered that he had accidentally opened a gateway to the underworld. At least, that’s what it looked like with all the gloves reaching out as if trying to claw their way out.

He Washed His Wallet and a Dog Popped Up

Some laundry wash fails don’t necessarily end badly, but they do cause unusual things to happen. Just ask this guy who washed his leather wallet by accident. When he took it out to see if the wallet was okay, he noticed that the shape of a dog had appeared on the front.

The Time the Laundry Got Knotted

A cycle in the washing machine is like a turbulent tornado, so you never know what’s going to happen when you open the lid. In this case, the laundry got all tangled up and tied in knots. We certainly don’t envy the fool that had to untangle this mess.

The Anti-Stress Pillow Got Really Stressed Out

This anti-stress pillow should come with a warning label that says it’s guaranteed to cause a mess and lots of stress if you put it in the washing machine. Then again, you can’t go through life with an anti-stress pillow that’s full of dirt and grime, can you?

The Washing Machine Tried Running Away

This washing machine was overworked, tired and it wasn’t getting paid nearly enough to take on so many loads. So, it finally said enough was enough and tried to walk away in the middle of a spin cycle. But sadly, it didn’t get very far before it was caught.

His Sweater’s a Little Too Tight Now

This guy washed his sweater and it shrunk. But he decided to look on the bright side and figured out that it would now fit very nicely on his dog. But judging from the way that his eyes are bulging out of the pup's head, it’s a safe bet that the sweater’s a little too snug on him, too.

This Washer Reached Its Limits

Now here’s something you don’t see every day. Not sure what they put in it. Maybe they added too many items or they decided to throw in a couple of bricks in there for a good laugh. But whatever they did, it tore the washing machine apart.

They told her to enjoy the little things in life. Then she accidentally threw her wool hat in the washing machine, but she should have read the label that said “Hand Wash Cold.” Now her hat has shrunk and while she’s not enjoying the little things, we’re certainly having a good laugh.

If you happen to run into a family that’s wearing nothing but pink, you’ll know why. It’s probably because they mixed their colored clothes with their white clothes. Whoever put the red garment in the wash needs to stop doing laundry.

His Leather Gloves Were Thrown in the Washer

He threw his leather gloves in the washing machine. He didn’t mean to do it. It was an accident. Once he found them, he was horrified. They looked like the paws of some supernatural creature. This is the kind of stuff nightmares are made of.

His Favorite Jumper is Now a Face Mask

This guy was absolutely gutted after he threw his favorite jumper into the washing machine and wound up with a sweater so tiny that it wouldn’t fit. On the plus side, he can use it as a face mask, but he might need to cut two holes out so he can see where he’s going.

She Should Have Checked for Crayons First

This mommy learned a valuable parenting lesson after realizing that her kid had stuck a crayon in his pocket. When she took the clothes out of the wash, she discovered that the clothes were all stained. At least next time she’ll check all the pockets before doing the laundry.

While this person was throwing dirty clothes in the wash, 2 rolls of toilet paper that were on top of the refrigerator accidentally fell into the washing machine. Unfortunately, he didn’t realize it had happened until after the cycle was complete.

This guy discovered that legal identification documents like this Merchant Mariner Credential aren’t waterproof, especially after being washed in warm or hot water and then going through a spin cycle. It’s too bad that he had to learn that the hard way.

Here’s another tragic example of what happens when people don’t read the label before washing. This was once a turtleneck sweater, but now the owner would be lucky if they could fit their arm through it to use as some kind of arm sweater.

When a label says dry clean only, it’s not a suggestion that you should take lightly. Sadly, this lady didn’t follow the rules and what she ended up with was a shredded dress instead of a cool early 20th century costume.