These Cats and Dogs Treated Each Other Like Family 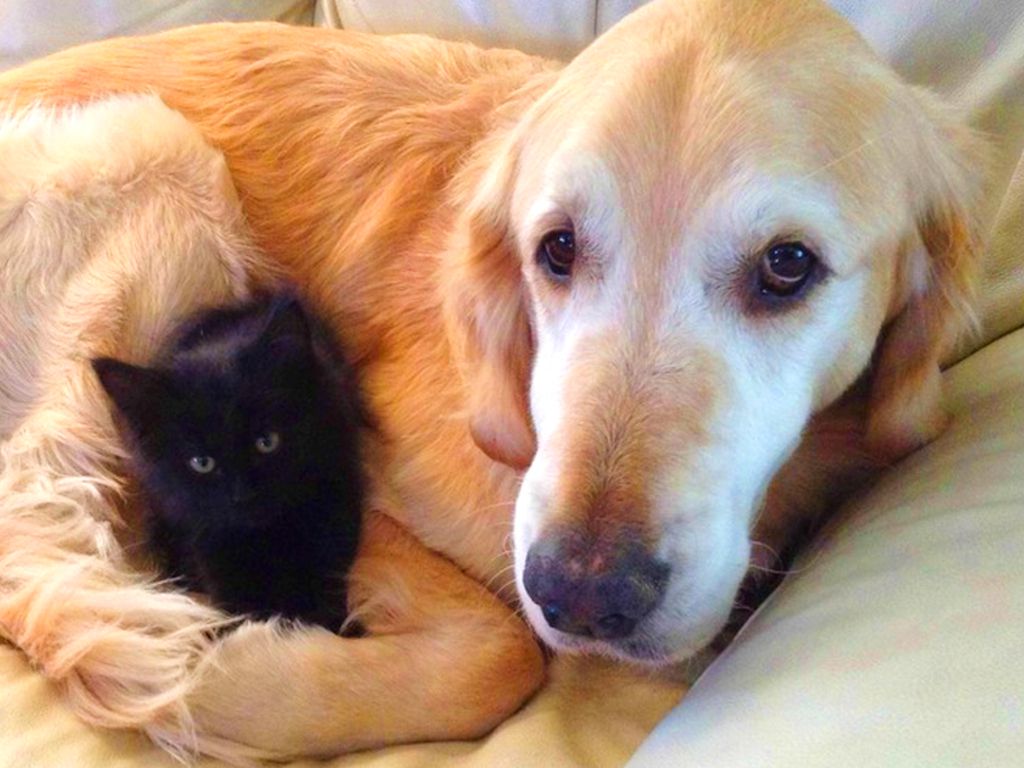 Cats and dogs living together is not the end of the world. In fact, here are some wonderful stories of animals that challenge the foolish notion of "fighting like cats and dogs."

Lady and Kitty are a somewhat unusual pair. You could say that Kitty is Lady's emotional support animal, as the two are only really content when they're together.

A Poor Choice for Lady?

Samantha Kreisler was adviced against adopting Lady when she first met her at a rescue center. A sickly runt with ringworm, Lady also suffered from extreme anxiety and would get physically sick whenever she was left alone.

Faced with the prospect of cleaning up doggy vomit whenever she left the house, Kreisler decided to simply bring Lady with her everywhere— even to lectures at college.

When Keisler started a Masters course, it was clear that her new professors wouldn't tolerate a dog in their classes. So, Kreisler tried something else: an emotional support kitten.

The tiny Kitty was all alone at the shelter when Kreisler decided to bring her home. Lady was intrigued at once, sniffing at the small cat and trying to make friends.

While Kitty was hesitant at first, she soon grew attached to Lady. The pair curled up together to sleep and quickly became close friends.

Safer as a Pair

With Kitty nearby, Lady no longer suffered from anxiety. Kreisler was able to leave the pair alone for lectures, safe in the knowledge that Kitty's calming influence would keep Lady from panicking.

The Healing Power of Friendship

The pair do everything together. Every morning they groom each other and they love to sit on the porch together, Lady watching parked cars and Kitty keeping her eye on birds and squirrels.

Kitty likes to play a lot more than Lady, but the two enjoy rolling around together when they're both in the mood. They're patient with each other, and ultimately, that's all Kreisler can ever ask for!

Nala Was In Need of Love...

Tiny Nala was still a newborn when she came to temporarily join Jamie Myers' eclectic family. Myers had a cat staying with her that she thought would be the perfect surrogate mother for the kitten.

Nala's first foster mother moved on to a new home before the kitten was ready to be alone, but thankfully there was another animal ready to take her place. A dog, Izzy, had recently had a litter of her own, and she was enthusiastic to include Nala in her pack.

Nala Was Never Left Behind

Every time Nala was left by herself, Izzy would walk over (even interrupting her puppies nursing) to pick her up and bring her close. Izzy was essentially making it clear that Nala had a family, and that she was being watched over.

One of the Pack

Nala quickly got used to being part of the dog pack. She would sleep snuggled up with Izzy and her foster siblings, and while she would sometimes wander around by herself, she never strayed too far from her canine mommy.

Time to Say Goodbye to Nala

When it was eventually time for Nala to be rehoused, Izzy took the loss hard. She missed her kitten and still felt her maternal instincts calling out to her.

Thankfully, there was a solution: another pair of orphaned kittens were in need to care. Thus, Izzy ws able to take over looking after yet more cats; a job that she relishes.

A Rough Start for Gertrude

Immediately before being rescued, Gertrude the cat was in a fight with a pack of vicious dogs who lacerated her stomach. Sadly, Gertrude was pregnant at the time, and while she evetually recovered, her kittens did not.

Enter Clementine, another rescue dog with an equally sad story. Clementine and her siblings got very sick, and, unable to care for them, their owner left them at a shelter and never returned.

Gertrude to the Rescue

Clementine weighed less than a pound when she first arrived at the shelter. In spite of her dog-related trauma, Gertrude instantly recognized a child in need and swept in to save the day.

A Feline Savior for Clementine

As soon as she saw Clementine, Gertrude began chirping and softly headbutting her cage, indicating that she wanted to get closer to the puppy. While the rest of the litter weren't didn't recover from their illness, Gertrude was able to keep Clementine warm and safe until the pup got better.

Comfy In a Cage Together

When the time came to rehome the pair, it made sense to put them in separate cages for their journey. Gertrude objected, prefering to squeeze in with her tiny friend to keep her company. The pair were, of course, only offered for adoption with the condition that they stay together.

Kathryn the Cat is a Mother to All

Stray cat Kathryn's story starts with tragedy. When the affectionate feline was discovered living in an abandoned apartment, she'd just given birth to a tiny litter of kittens. Sadly, Kathryn's babies died shortly after being moved into a rescue shelter.

Kathryn Was Desperate to Love

Clearly still in tune with her maternal instincts, Kathryn looked everywhere for an outlet for her love. She wasn't remotely scared of any of the dogs in her shelter, and when a litter of orphaned puppies arrived, she found her new family.

Immediately upon spotting the pups, Kathryn began trying to lick their faces and groom them. The dogs were initially hesitant to accept Kathryn's love, but they soon learned to appreciate her affection.

Where Kathryn had previously spent her days crying out for her lost kittens, she now was very content. She lived with the dogs and even ate dog food when it was offered to her. In turn, the puppies began nursing from her, accepting her as their surrogate mother.

Eventually, the puppies had to be moved to forever homes. Thankfully, Kathryn has new children to foster: a pair of tiny kittens that are in desperate need of her love.