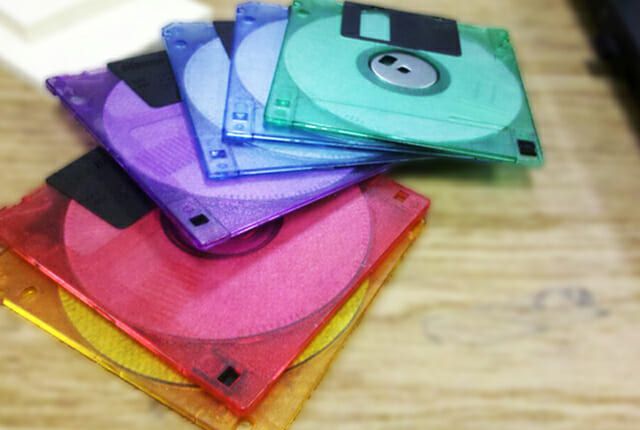 The early 2000s were an amazing time for many reasons, one of them being the awesome school supplies. Kids these days don't know the joy of picking out the coolest floppy disk color. They've never burned a CD for their crush. They've definitely never traded Dunkaroos for Doritos 3D. These are some of the coolest school supplies from the best decade, the '00s.

In the early '00s, teens didn't actually have our own computers, but we definitely fought over who got to sit at that one badass colorful clear monitor in computer class.

They got all over the side of your hand and smeared across your entire loose-leaf homework, but they also saved your ass from having to start all over when you had to cross something out on homework you had to hand in.

Our girl Lisa Frank was a remnant from the '90s, but she held strong well into the '00s. Rainbow unicorns and multicolor dolphins shouldn't have worked, but Lisa made them cool AF.

When Lisa Frank was no longer cool enough, Claire's had the solution with the very sassy, totally edgy Happy Bunny.

Because once you got to high school, you wanted something cute but realized Happy Bunny was obnoxious.

A girlier alternative, these were always pink and if it was a pencil case, it definitely had purple fur on it.

These were most visible when used on black paper and teachers hated them, so you couldn't use them for actual assignments, but the pages of your Paul Frank planner never looked classier.

Not required school supplies, but all the cliquey girls had these. The rest of us had moms to assure us that their bags weren't REALLY Louis Vuitton because what parent in their right mind would buy a designer bag for a 13-year-old?

Much like the fake Louis bags, these Tiffany charms were passed off as real by the girls wearing them when the rest of us knew the truth.

Your friends wrote all over it and if you were really cool, you ironed on some patches and wore it on only one shoulder, forever destroying your posture but building your social status.

What started out as a dedication to a noble cause quickly went wrong and turned into teen forearms full of all sorts of knockoff gel wristbands imprinted with names of charities, bands, clubs, sports – some were even just for show with stuff like "best friends" or "player" written on them.

If you were a student in the early 2000s, the only way to save those PowerPoints was on a clear, colorful floppy disk.

And once they were obsolete (which was soon), you got these presumably for homework, but really for burning mix CDs for your friend who just got his permit and was going to be able to drive once he passed his license test.

These soft, moldable, brightly colored and sickeningly sweet-smelling erasers probably never actually touched a piece of paper. They were too pretty and smelled too nice, so they stayed in their plastic case until you wanted to sniff them.

Elementary schoolers were only allowed to use pencils, middle schoolers only got blue or black ink, but high schoolers could spice up those history notes with red and purple and green because why the hell not?

These were the only way to avoid that giant bump on your finger from writing with your pencil all day. You know the one.

Got a plain white binder or black copybook? Also got a stack of Teen People magazines you're done with? Perfect. Get scissors and a glue stick and now it's a one-of-a-kind item that totally shows off your unique teenage personality.

These babies revolutionized the brown paper bag monopoly on textbook covers. They came in every color and pattern, including glow-in-the-dark. Plus, you could write on them and then just pop them in the wash – now they're reusable (though you made your parents get you new designs every year anyway).

These eliminated the need for trips to the pencil sharpener, which was clutch, but they were also annoyingly squeaky. Bonus points for the little plastic container of lead refills, though.

Looking back, does anyone know what the point of these pencils were? Did anyone actually go through all of the little nubs of lead, or was it more of a cool novelty item that you ended up using for a week and then never touching again?

This were great until you dropped it and art supplies exploded literally everywhere.

You had every flavor and always ended up losing them, but they'd turn up months later in the back of your desk, the bottom of your backpack, the floor of your mom's car...

You kept these in your one-shoulder Jansport for fresh breath after lunch. You don't even know if you liked them, but some of the coolest famous sisters endorsed them, so you had to have them.

These first started popping up in the early 00s, and they're still made, which is a testament to how fantastic of an invention they were.

If your mom went grocery shopping and brought these bad boys home, you knew lunch this week was gonna be LIT.