NBA Draft Steals: The Best Players Ever Selected After The 30th Overall Pick 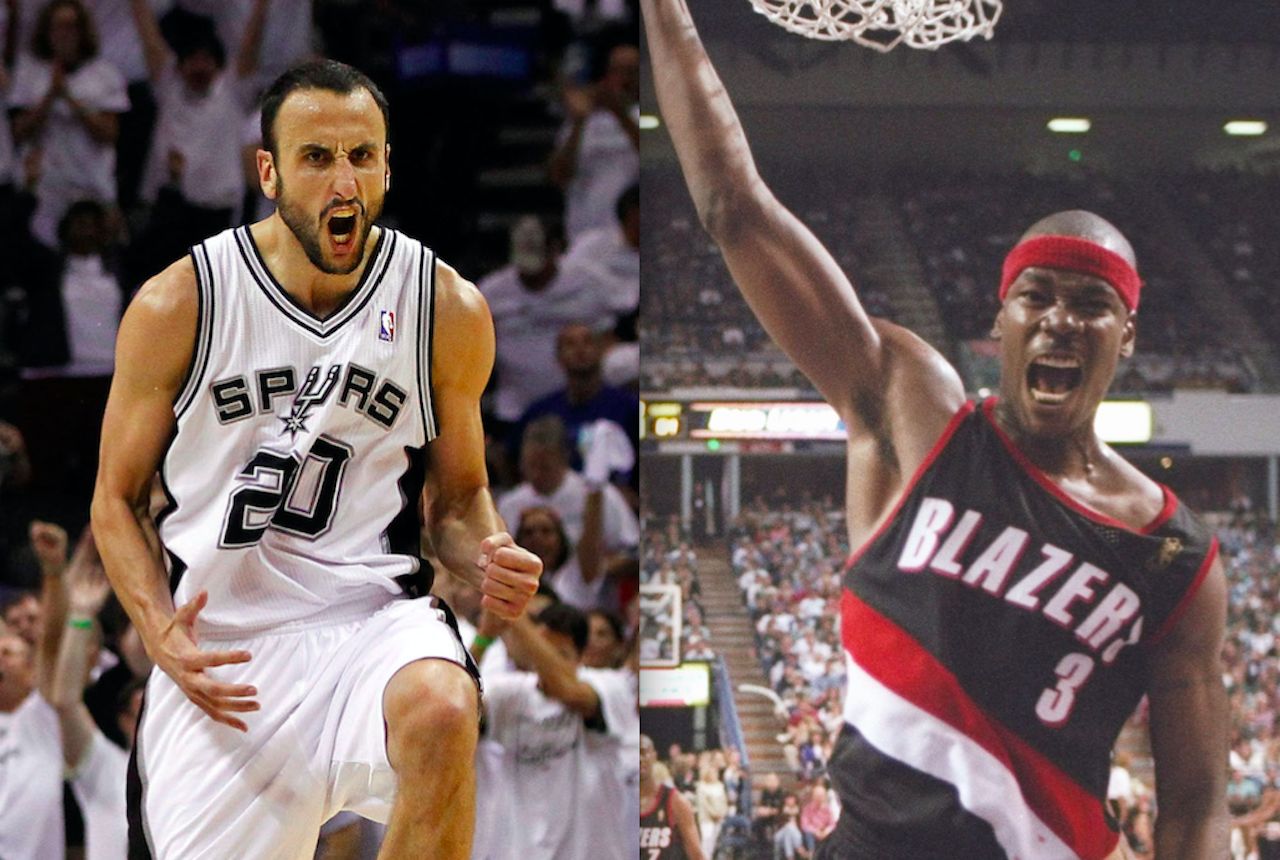 No first-round pick? No worries

While the Warriors battle the Rockets and the Celtics take on LeBron James, Kevin Love, Kyle Korver, and a pack of warmish bodies in the 2018 conference finals, fans of the NBA's other 26 teams are looking forward to the NBA draft on June 21. But as things stand, the Rockets and five of those teams — the Pistons, Pelicans, Heat, Raptors, and Thunder — won't get a chance to pick in the draft's first round. Fortunately, there are always diamonds in the rough. Here's a list of the best NBA draft steals to be taken off the board after the 30th overall pick. (Players who opted not to come to the NBA from the ABA don't count; sorry, George Gervin.)

A point guard who rarely met a shot he didn't like, Nick the Quick was named to the 1998 Western Conference All-Star team five years into his NBA tenure. Over his 13-year career, the 37th overall pick in 1993 averaged 14.4 points and 6.6 assists per game, and reached the Western Conference Finals with the Mavericks in 2003.

[dx_custom_adunit desktop_id="RTK_K67O" mobile_id="RTK_5yk0"] The Mississippi Bullet had the mentality to match his moniker, finishing in the top seven in field goals missed seven times in his career. During his five-year peak, the 40th pick of the 2005 draft averaged 22.2 points, five assists, and 1.8 steals per game, earning Most Improved Player honors in 2008.

One of the louder players ever to take an NBA court, Boozer treated fans to shouts of "and one!" for 13 seasons, reaching All-Star status in 2007 and 2008. Over those two seasons, the 35th overall pick of the 2002 NBA Draft averaged 21 points, 11 rebounds, and 2.9 assists per game for the Utah Jazz.

The 76ers selected the guard out of high school with the 45th pick of the 2005 NBA Draft. In 2017-18, Sweet Lou narrowly missed his first All-Star selection despite averaging an efficient 22.6 points per game, so he'll have to settle for his inevitable second Sixth Man of the Year award.

[dx_custom_adunit desktop_id="RTK_K67O" mobile_id="RTK_5yk0"] The Nets selected Korver with the 51st pick of the 2003 draft then promptly sold his rights to the 76ers, with whom he'd embark on his career as one of the greatest catch-and-shoot wings of all time. He's led the league in three-point percentage four times, and he currently has the sixth-best percentage from deep of all time, at 43.1 percent.

At 6'6", Ceballos doesn't fit the mold of an NBA leader in field-goal percentage. Yet that's what he was in 1992-93, when he shot 57.6 percent from the field in his third season after being drafted 48th overall by the Suns. Two years later, in his first season with the Lakers, the Garbage Man earned his first and only All-Star nod.

Versatility was the name of Captain Jack's game, able to score from the wing, run the point, and defend all shapes and sizes throughout his 14-year NBA career, which included an NBA championship with the Spurs in 2003. The Suns drafted him 42nd overall in 1997, but waived him before the season. He didn't find his way into the league until 2000.

[dx_custom_adunit desktop_id="RTK_K67O" mobile_id="RTK_5yk0"] Six seasons into his NBA career, Middleton has yet to land an All-Star selection, though he should have received his first as an injury replacement in 2017-18: The 39th overall pick in 2012 averaged 20.1 efficient points, four assists, and 1.5 steals per game while providing high-level defense on the wing.

Dragic, picked 45th overall in 2008, probably didn't deserve his 2018 injury-replacement All-Star nod, but it more than made up for his being snubbed in 2014, when the point guard averaged 20.3 points per game while shooting a scorching 50.5 percent from the field and 40.8 percent from deep.

Though it took a few years for him to put things together, the 35th overall pick of the 2008 NBA Draft proved to be worth the wait. As of 2018, he's led the league in field-goal percentage five times and rebounds per game twice, and he has a pair of All-Defensive first team nods and three All-NBA teams to his credit.

Even if the 60th overall pick of the 2011 draft never regains his pre-hip-injury form — a proposition that looked more and more likely as the 2017-18 season progressed — there's no denying the brilliance of his two full seasons with the Celtics, when the diminutive point guard averaged 25.5 points and 6.1 assists and garnered a spot on the 2017 All-NBA second team.

A stretch power forward before we even knew what that was, Lewis used a supreme shooting stroke to average more than 20 points per game three times and make a pair of All-Star teams. He helped two squads to the NBA Finals: the 2009 Magic, who fell to the Lakers in five games, and the 2013 Heat, who beat the Spurs in seven.

[dx_custom_adunit desktop_id="RTK_K67O" mobile_id="RTK_5yk0"] Four years after the Bucks made the Ohio State alum the 46th overall pick of the 2000 draft, Redd surprised the NBA world by averaging 21.7 points per game and making the All-Star team. It was the first of six consecutive seasons in which he averaged more than 20 points per game.

Few knew the doughy 41st pick of the 2014 NBA Draft would turn out to be one of the league's best passers and most dynamic offensive centers. In 2017-18, his third season, Big Honey averaged 18.5 points, 10.7 rebounds, and 6.1 assists per game as the offensive focal point for the team with the sixth-best offensive rating, according to Basketball Reference.

Before Uncle Cliffy became Uncle Spliffy, the forward/center made a pair of All-Defensive teams, was named the 1992-93 Sixth Man of the Year, and received an All-Star nod in 1994. All that after the Portland Trail Blazers made the UConn alum the 36th overall pick of the 1989 NBA Draft.

[dx_custom_adunit desktop_id="RTK_K67O" mobile_id="RTK_5yk0"] Arenas' rise from 31st overall pick in 2001 to stardom culminated in three consecutive All-NBA nods from 2005 to 2007, making the All-Star team in all three seasons and averaging 27.7 points, 5.7 assists, and 1.9 steals in that span. The season before that run, he claimed the league's Most Improved Player award.

One of the NBA's quietest and most consistent stars, Millsap was selected by the Utah Jazz with the 47th overall pick in 2006. He then joined the Atlanta Hawks in 2013, earning four consecutive All-Star nods as the stout defender expanded his offensive repertoire. He led the NBA in defensive win shares in 2016, according to Basketball Reference, and was awarded a spot on the All-Defensive second team.

The Cavaliers selected Laimbeer 65th overall in the third round of the 1979 NBA Draft, but traded him after a season and a half to Detroit, where the bruising center became a star with the Bad Boy Pistons. The Notre Dame alum was named to four All-Star teams, led the league in rebounds per game in 1985-86, and was key to back-to-back titles in 1989 and 1990.

[dx_custom_adunit desktop_id="RTK_K67O" mobile_id="RTK_5yk0"] It's only been six seasons, but it's hard to argue with Dray's credentials: three All-Defensive teams, one Defensive Player of the Year award, two All-NBA teams, and 8,524,832 testicles destroyed. The 35th overall pick of the 2012 NBA Draft and his teammates are knocking on the door of their third NBA title in four seasons.

Ginobili has yet to decide whether he'll return for the 2018-19 season. But whatever the 57th overall pick of the 1999 NBA Draft decides to do, they'll keep a spot warm at the Basketball Hall of Fame in Springfield, Massachusetts, for the Argentine. One of the greatest sixth men of all time, the lifelong Spurs guard has a pair of All-NBA nods and four NBA championships to his credit.

The 76ers selected Cheeks with the 36th overall pick of the 1978 NBA Draft, and he rewarded them by helping the team to an NBA championship in 1983. The Hall of Fame point guard made five All-Defensive teams (four first teams) and four All-Star teams. His 2.1 steals per game are the 10th-best career mark in NBA history among qualified players.